Day 16: Live update – Odometer 54875km. Travelling across the Kimberley. It’s refreshing to see a very rugged landscape dominated by ranges of sandstone hills, after a few long days out on flat roads. On the other hand, the 36ºC temperature under radiant sunlight is pretty hard to deal with in a region that doesn’t have any leafy shade; feeling lethargic and drowsy in the summery heat and humidity.

It was a long one, settling in for camp the night before, but I was sufficiently revived to continue my way to Darwin by the next morning. It’s never really a chore to wake up out of a tent. In contrast, waking up from a bed seems to take ages, as though you feel more content in hiding underneath the familiarity of the warmth that feeds reluctance. In short, camp out if you’re guilty of sleeping through multiple alarms. Nature’s alarm comes in the form of chirping bird life and the rejuvenating sensation of fresh air.

Packing up and leaving the camping area was done without any fuss. It wasn’t until I rode past the campsite entrance that I noticed a few large caution signs. Little did I know that I was sleeping near a sizeable crocodile colony. Some foresight applied to my intended camp stays would probably be a smart thing to do, especially when I’m on the other side of the continent from home. That, or I should take my own advice and avoid riding at night so that I can diligently survey my sleeping area for the evening while the sun is still out.

Visiting Halls Creek once again, this was a mark down against my travel record. It really was a massive waste of time in the previous evening to backtrack from my progress to Darwin. At the very least, it was an opportunity to see the town properly under broad daylight. Halls Creek serves as the point from which off-road adventurers can top up on supplies before heading into the extremities of the outback.

The ranges of the Kimberley forms the basis of the rugged landscape, which is part of the northernmost region of Western Australia. A very sparsely populated region, with many indigenous communities spread out in between the very few urban centres. Apart from Fitzroy Crossing and Halls Creek, both very small towns in their own regard, Kununurra serves as the remaining town to visit before I reach the eastern border of the state, where I would continue on to visit the state of Northern Territory. 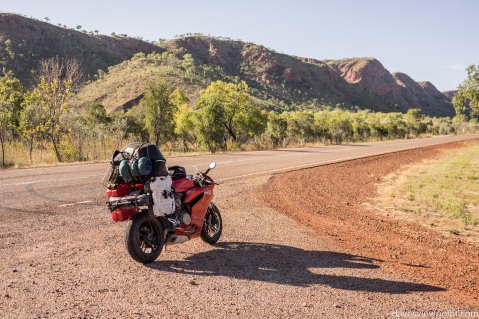 On the way to Kununurra, grass fires were burning across fields nearby the highway. I wasn’t quite sure if I had to call in emergency services in the middle of nowhere. I felt rather naive about such a situation, because it was in a very remote location. But, aren’t there always dozens of bushfires burning around the country? Fire is an essential part of the germination process of certain Australian flora. Aboriginals have long traditionally used bushfires to shape their landscape. On the other hand, has my ignorance contributed to a disaster that shouldn’t have happened? Avoidance of intervention is probably why society has degraded to a viral cluster of selfish little bubbles. I have much more to learn in life.

By afternoon, I arrived at Kununurra, the largest urban centre in the Kimberley region, as well as being the prime location from where tourists can base themselves to explore the wilderness of the Gibb River Road, a place where I wouldn’t dare take my Panigale due to the outright ruggedness that only a proper 4WD or a real adventure bike can handle. The Gibb River Road will hold no mercy against pseudo-adventure bikes.

I met up with this bloke at the shopping centre in Kununurra, travelling in his 4wd, who stuck around while I ate. It’s always great to be able to share our experiences with one another, and it allows us to expand our knowledge within things of life. In the end, we are motivated to explore, and explore further than we may have initially intended. We may not become friends, or cross paths with the same individual as strangers. But, no matter who you meet on the road, there is one thing that can be unanimously maintained: Travelling brings happiness.

The town was so hot, even into the evening. It was tempting to go and have a quick dip into the river. However, I didn’t fancy the idea of being bitten by a croc in the water, nor did the thought of wasting time, thinking about what to do, entice me any further. After getting some supplies for the night, as well as a few cold drinks, I headed my way out of Kununurra, because I was still very much behind my schedule and, no matter what, I had to reach Darwin by tomorrow. But, yet again, I am without a plan on my sleeping arrangement for the night. Old habits die hard. 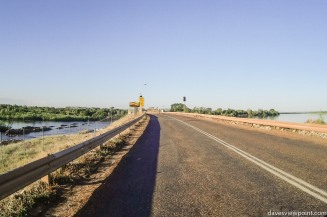 Late night arrives, crawling along on the highway, defensively riding against the unpredictability of the open road. After all, no matter how many kilometres that I have travelled so far in similar circumstances, things can and potentially will knock me out of the smooth progress that I’ve been making so far. That’s not just for this particular trip around Australia, but throughout my past few years as a dedicated day and night, rain-or-shine motorcyclist. Complacent people do not belong on motorcycles. This ain’t just a simple and safe hobby; your life is constantly on the line at every moment.

But despite circumstances, I will always be an unashamed whore for the open road. I shall constantly crave an alluring variety of ocular experiences, and I shall long for more of those scrumptious kilometres as part of the never-ending journey of discovering the land flowing with milk and honey of unparalleled divinity. In simple words, a man’s gotta do what a man’s gotta do. With that mindset ingrained, I now cross the Western Australian border to enter Northern Territory to complete my goal of visiting every single capital city in Australia. Show me what you’ve got, Darwin!