Panigale Around Australia 2016: Day 18 – Darwin to Katherine via Kakadu NP

Day 18: Live update – Odometer 56356km. Quite gutted that I wasn’t able to see much of Kakadu National Park. Hopefully I will be able to visit and experience it to the fullest some time in the future. On a side note, crocodiles are king out here. Every creek and river crossing is accompanied by a stern warning that discourages loitering around their habitats.

There’s no such thing as a cool morning in Darwin. The start of the day is characterised by the city’s unapologetic humidity. With temperatures eclipsing 30 degrees after breakfast, ensuring a constant supply of drinking water is one of the foremost priorities of things to sort before heading back down south into state’s dry interior. The Rotopax water pack’s 7.5L is sufficient for a day or so, and this is especially important as water from various regions may taste different. Read: Acceptable, or simply not nice, depending on its source.

A brief visit of the coastline of Darwin under broad daylight before heading out. Looking out to the Timor Sea, the ocean is a very pure light blue; so distinctive is the colour that it almost looks like it’s been dyed. The water looks enticing for a swim, but don’t let that fool you. Despite the extreme heat that Darwin is constantly subjected to, no sane local would ever dip their toes in the water. This place is the epitome of Australia’s dangerous wildlife. Jellyfish, sharks and stingrays reside in every body of seas that surround the city. Crocodiles are also known to surf the waves around some of the beaches out here. Yeah, I’d rather keep my limbs and stick to swimming pools instead, thank you.

Darwin is Australia’s least-populated state capital, owing to its isolation and the state’s extremely sparse population density. The metropolitan area is almost wholly surrounded by water, which makes access to the coast just a short ride away. In terms of geographical size, Darwin’s CBD is a similar size to Parramatta’s business district in Sydney’s western suburbs, so walking from one end of the city to another is a matter of just a few blocks. An easy feat, only if you can tolerate the stifling weather that’d melt toy soldiers on the pavement. 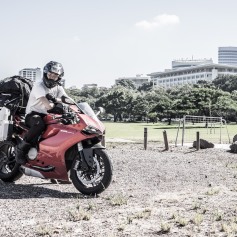 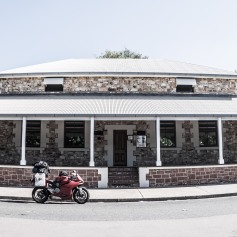 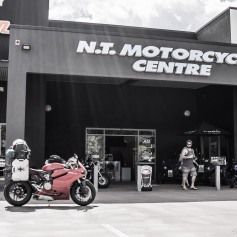 Since getting my clutch fluid replaced in Melbourne around two weeks ago, it was already becoming rancid. The fluid was literally a murky black colour, and the clutch lever was losing pressure, so I thought it was a good idea at this point to change it over. This was a meaningful opportunity to visit the workshop at NT Motorcycles in Darwin’s south-eastern suburbs, which is the largest motorcycle dealership in the Northern Territory. The store spans two expansive levels and sell various brands, although they primarily serve as the official Harley Davidson retailers.

My next big destination being Cairns in northern Queensland, I made my way back down the state. I thought that Kakadu National Park would be a worthwhile detour to make as it was relatively close by, and it is a world heritage area that is possibly the biggest attraction of the Northern Territory. The road that takes me to Jabiru and back out on to the Stuart Highway would be half a day’s worth of riding without too many stops.

It sounded like a great idea, until I realised that all of Kakadu’s big attractions are a lengthy hike away from road access. Kakadu National Park is a place that requires more than just a few hours, and requires a thorough exploration for visitors to fully appreciate. The park deserves a much closer look than what I have given with my time. As far as I feel, I’ve visited Kakadu, but I also haven’t because the main highway route that circles the park does not give any insight to its true offerings. I must return again one day. 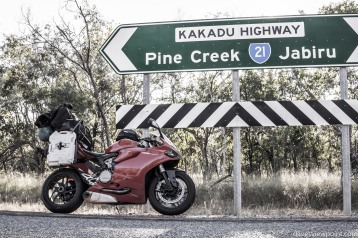 Night falls by the time I arrive at the very small historic town of Pine Creek. Home to a population of under 500, this is a very small community, but also serves as one of the major stops along the lonesome Stuart Highway. I just made it in before the closing time of the only servo open, so that I could fill up my main fuel tank as well as the Rotopax. If it wasn’t for this shop, I would definitely have camped right in front of the service station, just so that I could get the petrol I needed as soon as it opened again. No apologies from me if that happened; got to do what needs to be done for survival.

The next roadside campsite on the Stuart Highway from Pine Creek was another 100km away. Despite tiredness setting in my consciousness, the surreal shimmer of the vast Milky Way in the night sky encouraged me to press on and persist with my journey. Because camping at night, bathed in balmy Outback perfection, under the starry constellations of the universe will always be worth that effort.