The Grom Tourer 2017: Day 7 – Melbourne to Albury via Myrtleford

Day 7: The midnight run. Looking up to the stars to guide me back home… (Though, probably a map would do fine for directions…)

Waking up in a new city for the first day of 2017. Melbourne, good morning, and great to see that you’ve provided me with great weather to grace my day! The clear and sufficiently warm conditions was a great change from the frigid and moist weather of last night.

Peter from Ariderslife spent a good part of the morning showing me around the city as my local guide. Apart from living in Sydney for a few years, back when I still had my Multistrada, he’s been a Melburnian his whole life, so he’s witnessed firsthand the transformation of Melbourne over the decades. Being an advocate for heritage buildings, he’s definitely noticed how towering new developments have been given priority over the preservation of characterful streets. Although modern Melbourne has become an international identity of its own, he is dismayed that the warm and historically unique side of the city is slowly being wiped away. 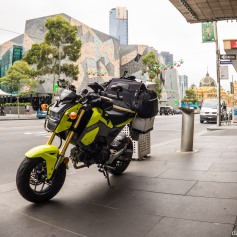 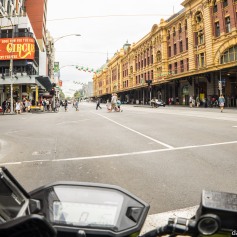 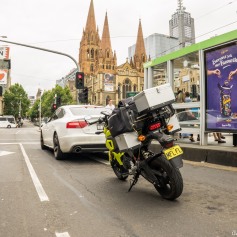 In saying that, Melbourne has also maintained its status as Australia’s culture capital. The biggest appeal of the city is that, even though it has become a proper big city, it still has retained its village-like atmosphere within its many laneways. In fact, these venues have grown to a point that the vibrancy of the laneways are a massive tourist attraction. Cafes, which populate these cosy alleys, aren’t really my thing, but an obligatory visit to Melbourne’s equally-popular graffiti alley had to be done. Hosier Lane is the most significant out of all these government-initiated street art spaces that are frequently refreshed and repainted by various artists. If you can block your nose from the stench of urine and put a blind eye against anti-social behaviour that occur in these otherwise-artsy lanes, you can appreciate the amount of talent that is on display. 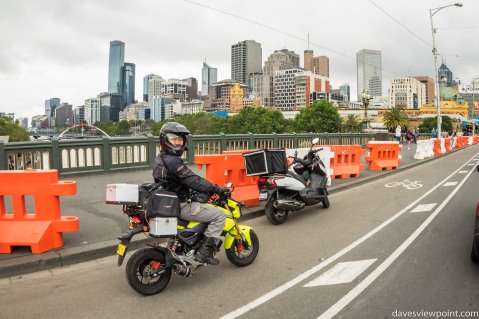 The Yarra River is the centrepiece of Melbourne’s scenic skyline. The open parks of the Royal Botanic Gardens help to define the contrasting heights and density of the towering skyscrapers of the CBD and the waterways that separate the north and south side of the city. The river is brown, but as long as you don’t look too closely, it’s fine! 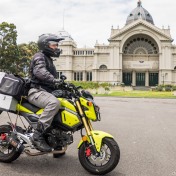 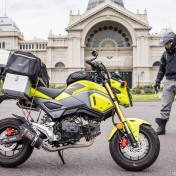 As Australia’s former largest city, Melbourne is home to numerous heritage-listed buildings in Australia. Royal Exhibition Building, located in Carlton on the north of Melbourne CBD, was built in 1880 and is a prime example of late 19th century Victorian architecture. An absolutely an impressively imposing building, it’s still used for its intended purpose as an exhibition centre for various purposes, although the newer and larger Melbourne Convention and Exhibition Centre down at South Wharf holds more of the big-ticket events.

Going up further north from the CBD, I approached Coburg. A suburb that is 8km north of the Melbourne CBD, tram lines are integrated together as part of the rest of vehicular traffic on the streets, as seen above. I’m still trying to get used to stopping behind trams particularly when I’m on the empty side of the road while passengers are alighting, fearing that somebody behind me might possibly not see me on the little Grom and consequently mow me down.

Staying around in Melbourne until lunch time, it was then time for me to set out on the road back towards Sydney, but I wasn’t going to be settling for a mundane ride on the Hume Highway for the whole return route. I’ve already done way too much of that. 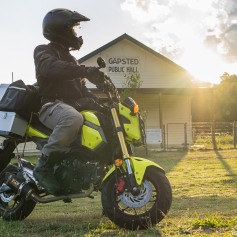 Although I wasn’t going to be doing much of it, the Great Alpine Road had to be done on the Grom. I love this stretch of road, which extends from Wangaratta on the Hume Highway intersection, all the way out towards the eastern coast at around Bairnsdale.

Agriculture and tourism is a big part of the economy along this route. Highly fertile soil allows for farming to thrive in the western part of the region, while the snow and its skiing offerings during the winter season is a major attraction for the tourism industry.

I’ve only gone down as far as Myrtleford on the Great Alpine Road this time with the Grom, due to the lack of time to go any further. The dimming daylight also reminded me that my headlights aren’t suitable at all for night rides, particularly in this region where streetlights are non-existent.

Mountains and hills surround this quiet and tidy village at Myrtleford. Timber logging is a considerable part of the economy here. Barren, stump-dotted hills are distinguishable against the otherwise lush forests like a person’s shaved mohawk. Many of these logged hills were particularly enticing, especially with the dirt tracks and trails that have been dug up by heavy machinery. What would Steve McQueen do across these vast hills and plains?

As dusk crept in to the landscape, it was time for me to head north from Myrtleford towards Albury. The most direct route out of Myrtleford was a road that was labelled as the Happy Valley tourist drive. The sky looked pretty with its pink hue but we’ll see how happy I remain, as I try to see my way around the many corners that await me for the night with those horrible Grom headlights.

The rolling countryside is a soothing sight for the traveller, and it’s no different in this part of the state. Endlessly flowing curves make it a hoot for a rider on a large adventure bike. The Multistrada was made for these sort of roads. But not the Grom, no. Not when I’m constantly abusing the throttle just to maintain my pace to try and maximise the remaining light that was on offer by the sinking sun.

Inevitably, night time arrived. The headlights on the Grom are just nowhere near the required coverage for night-time country touring. If I thought the Panigale was pretty bad, as mentioned in Day 9 of the Panigale Around Australia road trip, the Grom is lethal. You really can’t see anything apart from what is directly metres in front of you, which is absolutely useless when you’re actually riding the darn thing. I may as well be riding with a walking cane designed for the vision-impaired, feeling my way along the empty country road. 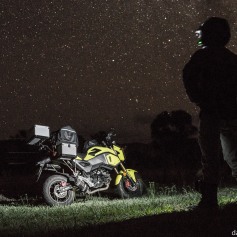 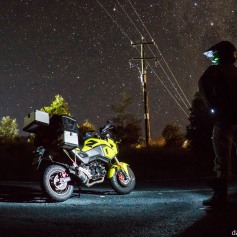 Eventually, I made it safely past Albury through the night, and set up camp on a roadside rest stop. Stars are always an incredible thing to behold, outside the big cities. Without the billions of little crystal ornaments of the universe above, my country night rides would not even be remotely as interesting. A night without stars is like a cream chicken soup without croutons, or a Caesar salad without Parmesan cheese. They truly make my night; a cherry on the top over my road trips. 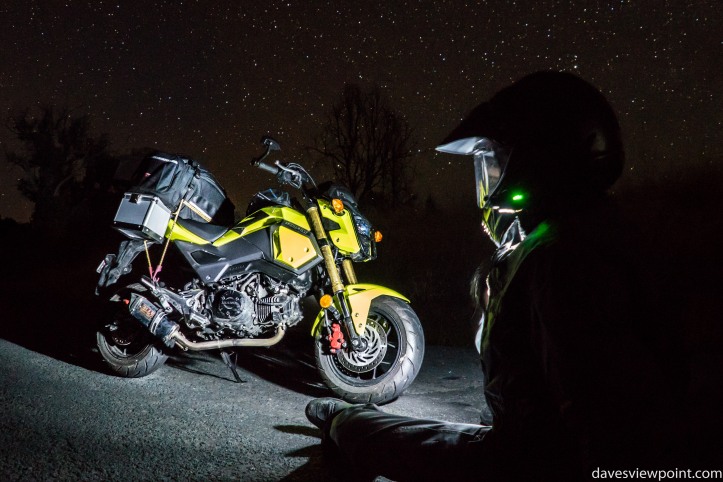 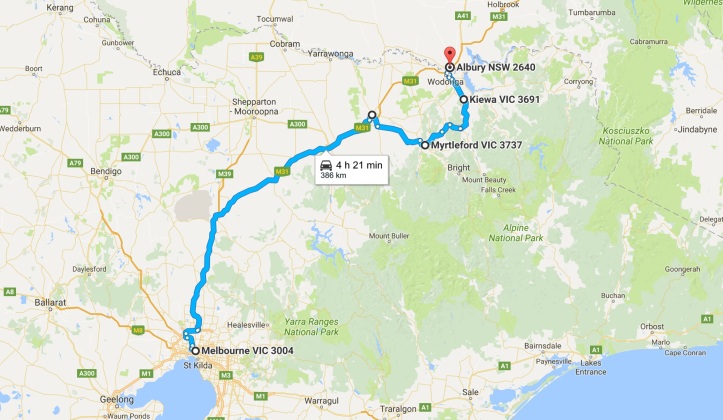