Africa Twin Across The Outback 2017: Day 5 – Coongie Lakes to Birdsville

Day 5: Live update – Odometer 15982km. What an incredible day! Got bogged belly-deep in loose sand as I was climbing up a hill at Walkers Crossing (see my photo comment for a small insight). Not keen on withering to death in the middle of nowhere without another soul in sight, I fought against the odds of fatigue and the outdoor elements to drag my way out to freedom! I am now at the Big Red, west of Birdsville QLD, which is the first of over 1100 sand dunes that make up the Simpson Desert region. Observing the sunset hue from the top of the massive sand dune to end an adventurous day was much akin to the concluding scene of a novel. Magnificent. Anyway, here’s my cringe-worthy first (and probably last) dab at the Big Red. Rate my dab!

Rookie mistake #5: Omission of a purpose-made offroad recovery system left me open to vulnerability over unsuspected ditches and bogs.

Aside from a few falls and drops, I’ve never really felt that I was at much risk of getting stranded. Sure, I had one really big fall at 70km/h which could have caused major injuries and damage to the bike, which thankfully did not happen, but I did not really experience a heart-stopping moment when I actually believed in the possibility of one. Well, at least not until I dug myself into a massive hole which brought me to a complete stop.

Most sections of Walker Crossing are very flat, although soft sand and bulldust is a frequent part of the trail. A few hilly parts also exist, where the track goes over the small sand dunes of the Coongie Lakes region. Most of those that go across these dunes are solid, so they aren’t too much of a challenge to negotiate. However, a few anomalies do exist, where the trails over these hilly parts are made up of very loose sand. This is precisely where my journey came to a halt. 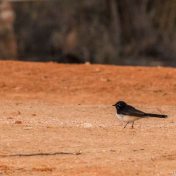 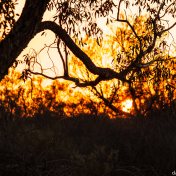 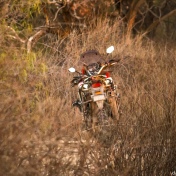 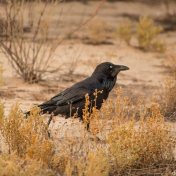 Such trails are a hoot to drive over with a dedicated 4WD or an ATV vehicle, which you can use to throttle out of a situation without really caring about whether you’d drop it like you would on a motorcycle. I was getting sick of picking up the bike every time I fell, so I was a little more cautious with how I approached the roads ahead of me. However, sand is best dealt with using more throttle, not less. Whether it be a motor vehicle or a motorcycle, there’s a degree of controlled recklessness that’s required to go over sandy places. My apprehensiveness was directly reflected on my throttle, as I refused to give too much gas out of fear.

And so, I approached a hill, which progressively became really soft. A more experienced trail rider would recognise that such situations require them to power out of uneven surfaces to lessen the chance of slowing down too much. In my case, I slowed to the point where I was trying to walk the bike over the ground, and slowing down in this case was a complete mistake. Just as water skiing requires a decent pace to maintain balance, riding on sand also demands you to be unwavering and decisive in the way that you apply all your controls.

I came to an inevitable stop, as the rear tyre scrambled for grip, of which it had none. The more that I applied throttle to try and go forward, the further down I went into the sand. It didn’t matter how much or little gas I gave, the only difference it made was the rate in which I dug myself deeper into my own trench of doom. This was the exact moment when I thought I was definitely going to be stuck in the middle of nowhere for a long time, if not forever.

Bogged belly deep! Digging my way out towards divine freedom, I used my foldable compact shovel to scoop out as much loose sand as my straining muscles could sustain under the raging desert sun. As small as the shovel is, it represented a momentous part in which helped me to attain liberty once again upon this dastardly merciless desert landscape that would digest you into dust and rubble if you don’t fight against it successfully. 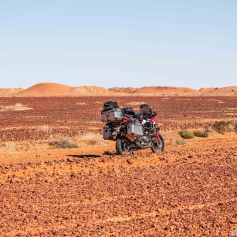 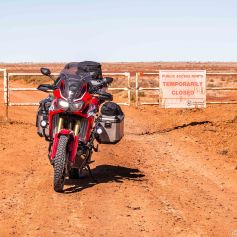 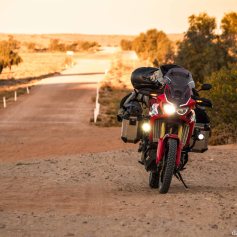 Not only did the shovel work as a digging tool, but it also worked as my makeshift improvised sand track recovery device! The hot winds, intense desert sun and fatigue made the situation ultra difficult for me, and simply digging the bike out did not seem like an effective strategy. In a spur of the moment out of pure desperation, I wedged the shovel between the sand and the wheel to give the rear tyre a solid area in which it can use to drive the bike out of the hole, enabling it to power out of it as though it were on solid ground.

I made it out in the end thanks to my foldable shovel, but I should have been more prepared for something like this. It was such an oversight on my behalf to not consider the chance of getting bogged in sand across what is one of the sandiest parts of the country! The next time I do another similar trip, I’ll be taking along an offroad recovery kit, which are basically plastic boards that have treads on them to maximise grip, whether you’re trying to get out of sand or mud. 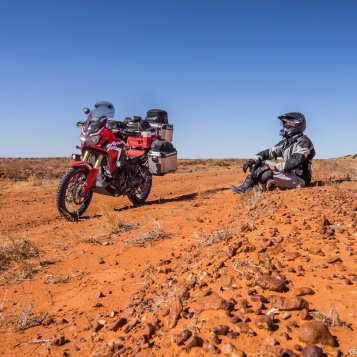 After many hours later, the sandy terrain transformed to a vista of hard packed red dirt, which was a welcome change as at least the ground was solid and comparatively predictable. It wasn’t without its unpleasantries as large rocks took over the scenery, which made the trail feel like as though you were riding over little glass balls of marbles. At the very least, this didn’t last half as long as the dreadful sandy route. 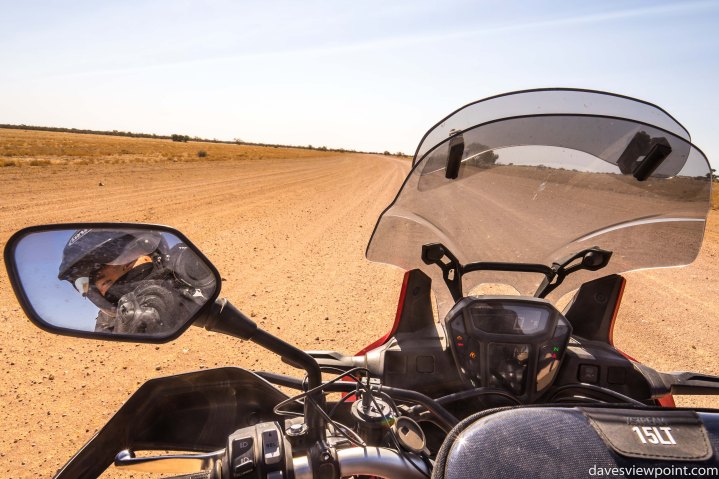 I approached a wide steel gate at the end of the trail that was loosely closed with a chain and an opened lock. As I went back to the gates to close them after riding my bike across to the other side, I noticed that there was a large prominent sign, which clearly stated that public access to the road behind me was closed. Okay, after completing all those hundreds of kilometres of sand, bulldust and stony trails am I told that I wasn’t allowed to do so?!

Not far off from the end of Walkers Crossing was the border crossing that lead to Queensland. This was fantastic news for me as it meant that the next town was getting real close. Birdsville is a small town with a population of under 300, and has a hot desert climate with a high of 49.5°C on record and average annual average of 22 days of rain. The town is one of only a few places within a stretch of over a 1000km to obtain supplies for those who venture across the Simpson Desert. Together with its isolation, these characteristics make Birdsville a great example of an Aussie outback town that has retained much of its rugged and hardy character.

The few kilometres of tarred roads made Birdsville a real pleasure to ride around town, especially after so many days away from it. The greatest pleasure, on the other hand, was the route to the Big Red, a major tourist attraction on the eastern edge of the Simpson Desert that helps greatly in keeping Birdsville on the map as a small but sustainable outback economic centre. 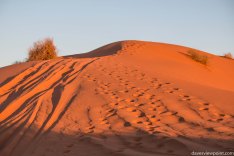 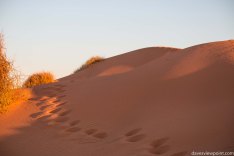 Standing at 40 metres in height, and just 35km from Birdsville, the Big Red is a travel opportunity that cannot be missed. The first of over 1000 large sand dunes, the Big Red offers an incredible opportunity to see the sun set from its western side. The visual texture of the sand changes as the sun dips into the horizon, and is an awe-inspiring sight of nature to witness in person. Photographers would love this place.

I personally favour the Big Red as a place of interest more so than, for example, Uluru, as you’re able to touch and climb over it without being too concerned about the cultural implications that may not be favourable to the spiritual beliefs of the Indigenous Australians. It’s also likely to be without any other person in sight, as I’ve found. The absolute serenity of the Big Red is one attribute that is difficult to experience at many tourist attractions. Even if you aren’t a spiritual person, this place naturally places your heart in a state of peace and meditation. It’s a beautiful thing. 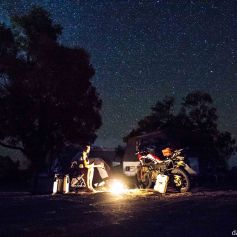 Here I am, back to the Billion Star Hotel. VIP motorcycle parking next to your bed, expansive world-class views and a therapeutic environment of serenity envied by many, brought to you by nature, free of cost. What a way to end a day, from the lows of boggy sand, to the highs of the peaks of the Big Red. The rich taste of adventure endures!

Note: Strictly just a guide and only approximate.