Africa Twin Across The Outback 2017: Day 13 – Peterborough to Wilcannia

Day 13: Live update – Odometer 19729km. Finally back on NSW soil. I don’t know why I’m raising my hand for… I still have a long way to go until I get back home!

😂 … Must make it back to Sydney by tomorrow.

Rookie mistake #13: Riding through one of the most populated kangaroo regions in Australia late at night.

This was my second last day on the road for this outback journey on the Africa Twin. After a technically demanding first week on various unsealed tracks, the second week had been comparatively less stressful, focusing only on main highway routes to stay out of trouble. Gradually returning back to my home state of NSW, I was taking a very relaxed approach to my remaining journey. 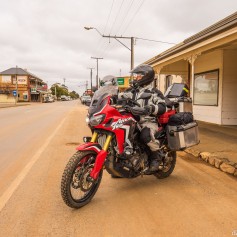 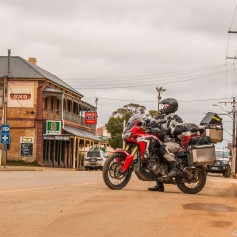 I shouldn’t assume that things will be easier and simpler within my home state. The distance from the western border of Broken Hill, the westernmost town in NSW, to the east coast of Sydney is approximately 1200km. Even if my perceptions of the road back home suggest that the final destination would be a ride easily completed, there are as many, if not more, road hazards which can hamper my journey. In this case, I was entering a particularly risky part of the country, due to what is possibly the most ubiquitous and expected feature of the Australian outback: Kangaroos.

Kangaroos are most active at dawn, dusk and night time. They are regarded as a major risk on the road due to their unpredictability. Not even a fortune teller would be able to foretell their direction of movements reliably. They are particularly volatile with their interactions with vehicles in environments where ambient lighting is dull or dark. On the road, the blindingly bright headlights of a vehicle can dazzle the vision of kangaroos, which then causes them to lose all logical sense of direction.

The section of the Barrier Highway between Broken Hill and Wilcannia is known to be very densely populated with kangaroos. Kangaroos are found in every state in Australia, its population growing up to 30% per annum. Regulations allow for culling of kangaroos in regions where it is deemed a pest. Due to their existing growing population and Australian conditions that are favourable for reproduction of kangaroos, they can get out of hand simply due to their sheer number. 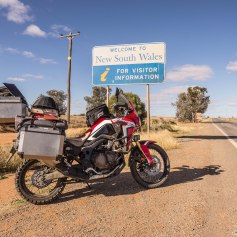 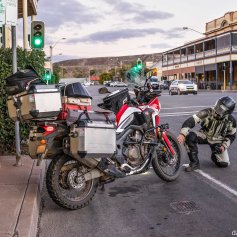 I met a local resident called Nick earlier in the day at Peterborough. He specifically advised me to be careful on the road, claiming that there were literally over 1000 kangaroos on the Barrier Highway at night a few months back, when he had to do an overnight drive back home with his mates. Check out my Facebook video to view my brief commentary of the road.

As I had discovered for myself, it goes to show that, no matter how far-fetched a claim may be, it’s better to be safe than sorry with a crashed bike and a broken leg. Nevertheless, I made it to my random roadside campsite 50km to the east of Wilcannia, concerned that there were so many kangaroos that I could dodge before becoming another statistic on the road.