When I daydream, I dream of places like this: a vast scenery which abounds with mountainous forests, views that has no end and roads that take me further away from the life that I live in Sydney. Ah yes, roads. Roads in the Snowy Mountains are known to be one of the best in Australia, and definitely among the top within NSW, if not the absolute best in the state, matching the equally-breathtaking twisting and winding roads of the Oxley Highway in the state’s north.

Unfortunately, my work schedule holds me back from living the actual adventure life around the clock, so I make do with bursts of shorter trips when I have any spare time. This led to the birth of a good road trip idea for me: a 24 hour “challenge” to the Snowy Mountains and back. I felt more than obliged to submit to the challenge. Here it goes!

6:00pm: Departure from Home in Sydney

Okay, now, for some unclear reason, I thought that there would be a petrol station after the Goulburn area towards the direct route of Canberra, so I had proceeded further without a fill up. I have travelled along this route in the past countless times. In this instance, however, have to admit that I didn’t keep a straight head. I like to think that the reason behind it is due to my focus on persevering against the pain of touring on a Panigale, but excuses won’t get you out of trouble when it does occur.

This would have to be the most stressful part of my whole Snowy trip, and it was due to stupidity that I won’t allow again. Firstly, missing out on the required fuel stops and, secondly, leaving without filling up my spare fuel container when things go pear-shaped.

I used every ounce of knowledge that I knew about “hypermiling”, something that I had fiercely looked into back when I was a uni student with a 1991 manual Toyota Corolla hatchback and a part-time job at a sushi kiosk at Macquarie Centre earning a measly $8 per hour. Hypermiling is otherwise referred to as energy-efficient driving, and this is a set of techniques used by drivers whose main focus is to maximise savings on fuel consumption. Techniques include maintaining a steady and consistent pace, coasting on hills in neutral, drafting behind larger vehicles to decrease direct wind resistance and experimenting on the optimal gear and speed that maximises overall fuel economy.

To maximise my fuel range, I had used the above techniques, apart from drafting as it is an unsafe option due to the need to tailgate. To expand on the known hypermiling ideas, I also utilised a constant race tuck to increase aerodynamic efficiency, as this would decrease drag. Well, that’s what I’d hope, but I reckon it’s made a 0.0000001% to the overall drag coefficient to the bike, because the luggage bags on the tail of the bike would be holding me back anyway. As a more realistic approach, I switched over to “Wet Mode” on the bike, which decreases the maximum power output from 195 bhp of the Sport or Race mode, to a comparatively modest 120 bhp, and also modifies the throttle response to provide a dramatically calmer and progressive power delivery.

The great news is that I had made it to the servo at Sutton, which sits near the edge of the Canberra metropolitan zone. My previous record on the maximum range of the Panigale stood at 250km before sputtering to a halt. On this occassion, I had achieved a total distance of 284km in a tank, and also set a personal record of 2 hours and 40 minutes on the saddle without any stops on the Panigale!

Upon filling up the tank, 15 litres ended up filling up my 15.5 litre tank to the brim, which meant that I still had 0.5 litres left until I actually emptied my tank Theoretically, then, I could have actually made it to Canberra, being it only 10km away! 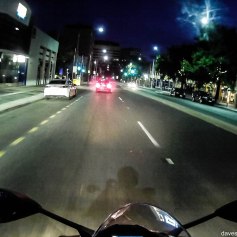 3 hours and almost 300kms later, I made it to Canberra without any further fuss. Yes, my arse felt like it took a real beating. It doesn’t matter how much I ride the thing, I will never become totally accustomed to the comfort (or the lack of) the Panigale presents in a touring situation. 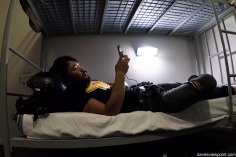 I needed some serious carbs before I called it a night, so I headed to a takeaway pizza place in central Canberra. Pizza makes any night a great one, as long as you’re not a vegan. Don’t ask me any advice on foods for vegans; I know nothing about it! 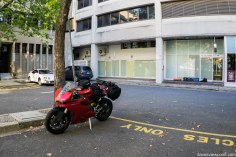 Starting off my day at 8:20am with 33377 kilometres on the odometer, I eagerly make an effort to get on with the rest of the trip. My alarm clock was set at 6:00am but, unfortunately, I tend to be a very deep sleeper at times. I probably needed the sleep, anyway, after the record saddle time that I had spent yesterday, but this 2 hour loss in time will serve as a detriment to my intention to return to Sydney within 24 hours.

My next major stop was set at Cooma, where I will need to fill up on petrol, regardless whether or not I needed it. My spare fuel container also needs a fill up; it ain’t going to do me any good if it’s empty and I end up stopping in the middle of nowhere. I didn’t need a repeat of yesterday evening’s nail-biting experience.

In terms of the actual road experience, the Monaro Highway is one of the most uninteresting parts of this region. Over 100 kilometres of single carriageways mean that you will be glad for the stopover at Cooma to break up the trip. The odd view like the scene above, near Michelago, helps a little with fatigue. 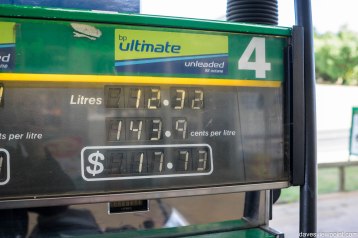 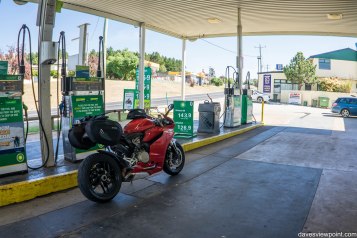 I stopped over at Cooma to get a feed at a fast food chain. In one of my previous posts, I had made a call to support local shops when you are out travelling in regional areas, however I succumbed to the forces of corporate marketing, settling into conformity, and basically making me a rider of contradiction.

Just to partially explain my motives, I needed my WiFi to catch up on social media banter! Well, probably not an absolute need, but when a want becomes an amply-important priority, it becomes an artificial need that, in some shape or manner, requires fulfilment. I lack self-control; don’t be like me!

11:00am: Travelling from Jindabyne to Thredbo

Lake Jindabyne is one of the most beautiful sights that your eyes can behold in the Jindabyne region. Surrounded by mountain ranges and golden fields, it’s a refreshing change from the relatively sparse views of the Hume and Monaro Highways. In some sections of the banks of the lake, you will notice the dead trees that are scattered and peeking out of the water reservior, remnants of the bygone era of the Old Jindabyne settlement that existed before the construction of the Jindabyne Dam in the 1960’s. 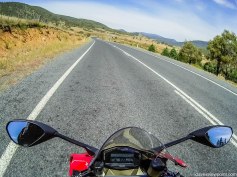 After Jindabyne, I made my way towards Thredbo. Once you approach the Alpine Way, you will notice that the road lines will turn from white to yellow. When you enter the yellow-lined territory, you know that it’s gonna be a hell of a ride!

Thredbo Village is the most popular skiing destination in Australia, and this is in part thanks to its very easy access. The Alpine Way between Jindabyne and Thredbo is one of the most immaculate roads in NSW; fully marked roads with signs, smooth-as-silk road surfaces and incredibly well-maintained all the way through. Does a 100km/h speed limit with 40km/h suggested corner speeds appeal to you? It’s no surprise that the Alpine Way is listed as one of the best motorcycling roads in Australia by various sources.

Just 5 minutes past Thredbo Village, the highest point of Alpine Way stands at 1580 metres. This section is known as Dead Horse Gap and, for hikers, it’s absolute bliss, but don’t take it as an easy walk; the weather can get pretty rough at times, as it can change very suddenly. It’s not hard also to get lost if you’re inexperienced as a bush walker. 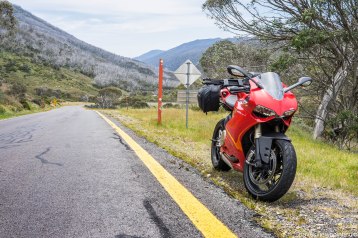 I had a chat with a rider on a 2015 BMW R1200GS who recognised me from a Facebook group called Sydneys Riders. Always great to have a fellow rider to talk to in the middle of nowhere! That BMW looks the goods; a spaceship for the long road ahead… 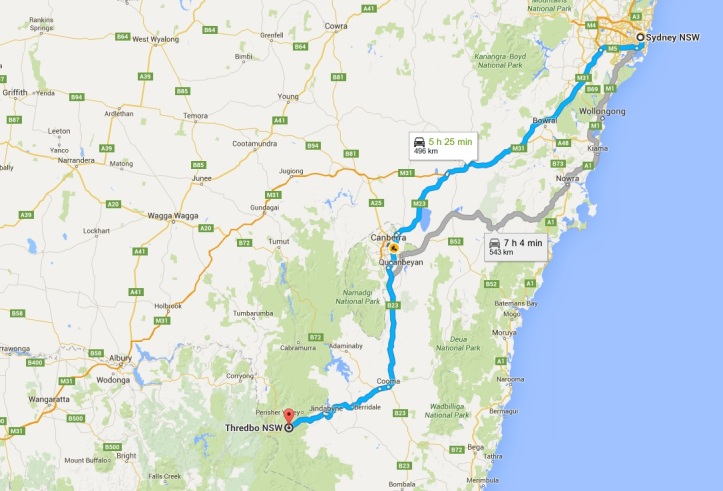