Here is the final part of the two-part series on the 24 hour challenge that I attempted on the Ducati 1199 Panigale. If you haven’t yet viewed Part 1 of the Snowy Mountains review, take some time to read it before looking into this one, as both parts cover the journey on an hourly basis.

So, the ultimate question will now be answered: Have I succeeded in completing a return trip from Sydney to the Snowy Mountains within the set 24-hour schedule? Find out now!

The road conditions around the western section of Alpine Way, between Thredbo and Khancoban, differ greatly from its eastern counterpart, between Jindabyne and Thredbo. Whereas the latter exhibits among the best road surfaces that you’d find in Australia, the former carves its way up and down some of the more rougher terrain of the national park. Once you head past Dead Horse Gap, you will lead yourself to twisties that no longer have any painted lane lines, and the surface is frequently scattered with debris. This part of the park is, after all, the wilderness of the forest, and weather conditions can vary significantly, becoming much cooler and changing to a warmer ambience as you reach closer to Murray Gorge, which is at the foothill where the park meets the Victorian state border. 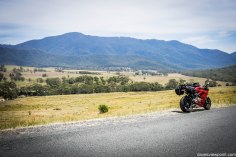 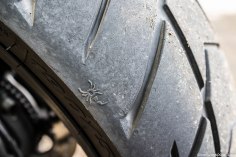 The relative haphazard nature of the climate, however, makes it that much more enjoyable. Towering claustrophobic-inducing walls of excavated sandstone in many sections of the road between Murray Gorge and Khancoban make it a potentially gut-wrenching visceral experience, when you decide to up the pace of the ride. There is no monotony here, and you best be alert as you tackle the endless curves and regular changes in gradients.

For me, I don’t feel that I’ve done the Alpine Way until I visit Scammell’s Lookout. This location provides the best view of the Great Dividing Range, where most of the highest peaks of the Kosciuszko National Park can be viewed in its full glory. The tallest peak that can be seen from this point is Mount Townsend, which stands 2209 metres above sea level. The one omission is the peak of Mount Kosciuszko (2228 metres above sea level) which hides behind Mount Townsend, which was in fact originally called Mount Kosciuszko until later measurements showed that it was slightly shorter, which prompted a name change to ensure that the Kosciuszko name remains associated with the highest point of the mountain range. 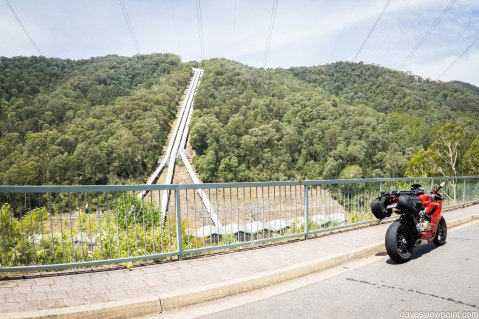 Before reaching Khancoban, the Snowy Mountains Hydro-electric Scheme is seen, with gigantic water pipes adorning the hilly forest. The Scheme provides around 32% of renewable energy to the eastern coast of Australia, according to Snowy Hydro.

On the southern outskirts of Tumbarumba, at Maragle Valley, the Southern Cloud Memorial scenic lookout provides an expansive view of the rolling hills of the countryside. The memorial pays tribute to the first-ever commercial air disaster in 1931, in which a Southern Cloud plane carrying crew and passengers went missing. The wreckage, which was found in this area, was not found until almost 30 years after the incident. The disaster prompted for a safety procedure revamp for commercial planes, such as the widespread use of radio communication from this point forward so as to monitor flight progress.

When I’m out on the open road, I transform into a being with an aversion towards excess food. Priorities shift towards the care and diligence applied to anything that has a direct effect on the progress of the road trip. Apart from the fast food breakfast meal that I had purchased earlier in the morning, and water throughout the trip so far to this point, I’ve had nothing but a pack of muesli bars and a carton of almond milk. Unfortunately, I take so little care for my diet when I’m out riding (I mean, the trip is all about the ride, not the food, isn’t it?!), so it’s not really a surprise that I don’t really have much excess body fat left in me. Want to lose weight? Lose your appetite by going on a tightly scheduled motorcycle road trip!

4:00pm: Back roads of Tumbarumba and Batlow. 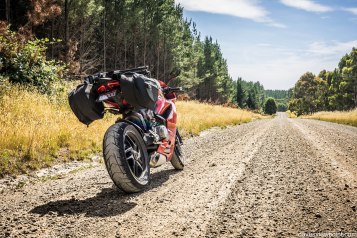 As I’ve basically got the hint that I won’t make it back to Sydney by 6:00pm, I decided to spend time setting up some ‘selfie’ shots with the bike in the middle of a pine forest past Tumbarumba.

5:00pm: Conceding defeat of the 24 hour challenge; taking it easy from Adelong.

Alright, so let’s just put this very frankly. Time left until original scheduled time of arrival of 6:00pm to Sydney: 1 hour. Estimated ETA back to Sydney from Tumbarumba: 5 hours. The 24 hour challenge has been forfeited.

6:00pm: Back on the Hume Highway, direct route back to Sydney. 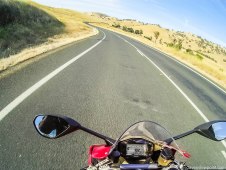 The coarse, high-speed country twisties have really eaten into my tyres. Not much effort is required to shred your tyres when the roads are designed to be carved enthusiastically.

Not much to see on the Hume Highway. It’s a great road to just putter along in a car with cruise control and stereo blasting away with music. That’s not the case for me, though. Most of my energy and focus becomes centralised into my will to preserve my backside, arms, back and wrists as the odometer count slowly creeps up and it’s not fun at all. Can somebody just please invent a teleportation device that allows me to bypass these boring straights?

The bike didn’t need a drink yet, but my backside required some mercy against a seemingly endless highway. For a stop that was meant to be a short break, I took quite a while thanks to a pair of dudes who just had to talk about the bike with me. As we all generally know, it doesn’t matter if you know each other, once you get into a conversation about bikes, it just keeps going!

Goulburn was my last major stop before heading directly back to Sydney. The very large merino statue, named simply as “The Big Merino”, is a symbolic testament to the significance of the wool industry in Goulburn.

9:00pm: On the Hume Highway, in the Bowral region 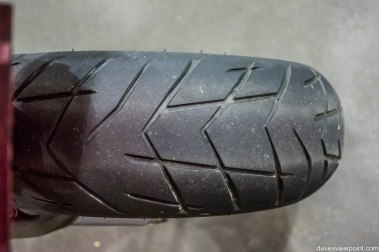 There were a few factors that went in the way of successfully achieving the 24 hour return trip to the Snowy Mountains. It did not really help that I decided to embark on the trip right after my day job, so I was already needing a proper break. This ate into the time that I had used for sleep time. Typically, I had to stop regularly to take some photos on the way.

So, would I do it again? Yes, why not! The Snowy Mountains is a wonderful place to visit, especially on two wheels. The vast open roads, relative isolation and the mountainous landscape are definitely one to enjoy. As mentioned in my previous post, Alpine Way is indisputably one of the best stretch of roads in Australia, and absolutely at the top among roads in NSW. Even with some B-grade roads and plenty of corners to tackle, 1200kms is still very achievable within 24 hours. But, that begs a crucial question: Would you head to a Michelin starred restaurant, and only order a bread roll? Similarly, why travel that far, only to return home without a proper taste of nature’s serenity?