For this week’s post, I’ve decided to do a very basic pictorial blog. For this one, I cover my first lone interstate big trip on a motorcycle in the Easter weekend of 2015. This was when I still had my Ducati Multistrada 1200S. I highly recommend this route if you wish to just clear your head out, and just ride without a thought.

The one thing that I found to be remarkable about this trip was the fact that I had decided to embark on this trip, initially unplanned, within 15 minutes of abrupt preparation. My luggage was more suited for a simple day trip on a route such as Putty Road (just as an example), apart from the tent, so I had to improvise my belongings, using my bike gear and its thermal layer as a sleeping bag, managing the battery levels of my phone and camera without access to charging outlets and relying on servos for essential goods.

So here is the trip, as detailed below!

Challenges:
-Aching legs. I actually felt a little cramped on the Multistrada for the first time.
-Neck aching, due to the helmet’s constant exposure to wind drag. I think this is where an extended windscreen would do wonders.
-Freezing hands in low-temperature conditions
-Accumulation of moisture and airborne debris on helmet visor, impairing vision
-If lost and stranded out in the open and isolated, it is very dangerous
-Petrol availability. Wilcannia was a hellhole in terms of fuel quality. Only an unknown quality of ULP91.
-Avoiding wild animals, including a kangaroo which I almost hit.
-Can’t take too much food due to my small carry pack. Servos were my best friend.
-You can camp and rest in a car, but you cannot do likewise on a motorcycle. Stop, Revive and Survive doesn’t really work if you’re a rider on the open road

Highlights:
-Opportunity to cover distance at a fair pace on a seemingly never-ending stretch of straight roads
-The bike ran absolutely flawlessly, with great power and torque on demand
-Motorcyclist camaraderie is alive. Ended up finishing my trip returning to Sydney, riding alongside two riders affiliated with the Harley Owners Group (HOG)
-I used basically everything I brought with me on the trip. A good thing, as I tend to be a minimalist in terms of items taken.
-The Outback is an underrated destination. More people should give it a go.

At just 15 degrees celcius, accompanied by fog and intermittent rain, there are better places to stay than the Sydney basin…

As I move further out west, towards Orange, the weather improves dramatically. A huge contrast from the dreary wet weather in the east.

…and the rain makes its arrival in the west, here at Dubbo, where roadkill outnumbers motorists on this lonely road.

But, there’s always hope up in the horizon. You always face the greatest struggle right before the breakthrough.

Life is not always fair, but you were not born to get stuck at one level and stay there. Believe in yourself and look above, knowing that change is in your hands. 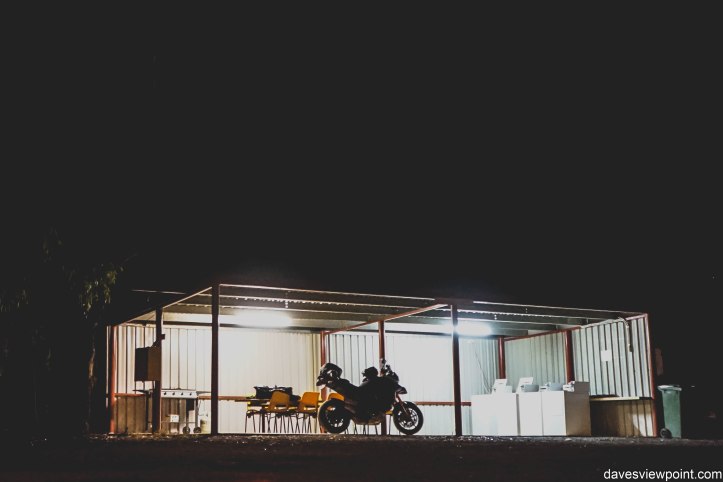 By nightfall, the drizzle saturates the dry plains of Nyngan. Taking shelter at a laundry quarter within a caravan park… 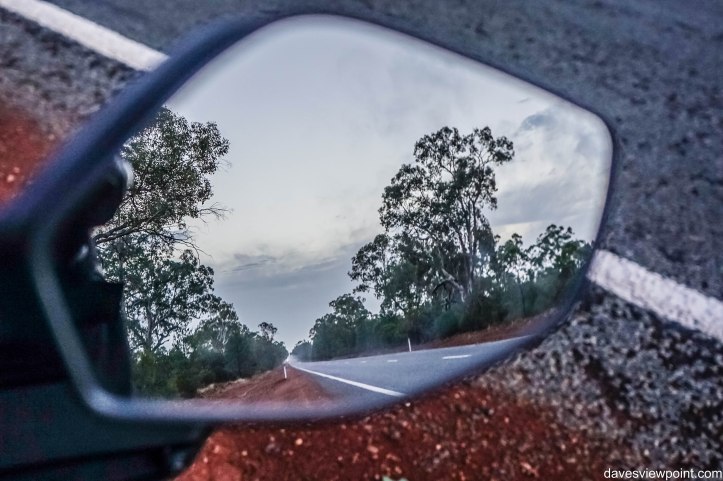 The long road ahead to Cobar…

It seems as though the rain clouds are following me in a westerly direction. The moist red dirt clumps up on my tyres like Play-Doh.

Wilcannia – What the hell am I doing here?

Wilcannia Bridge, that goes over the Darling River. 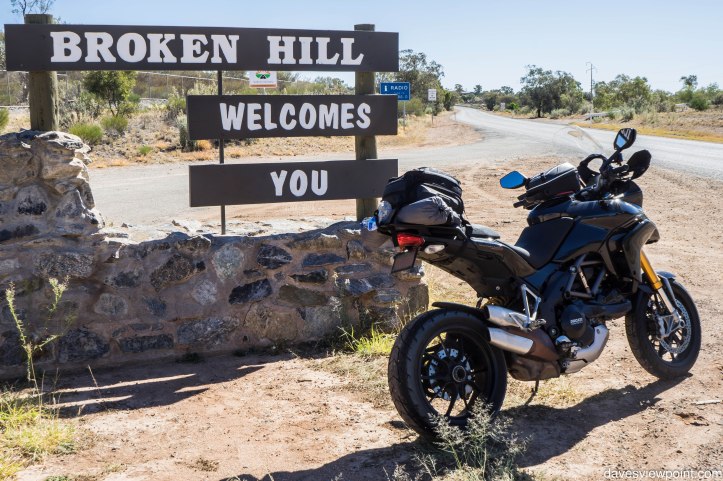 With tired eyes, after 200kms of seemingly endless and monotonous straights, I arrive at the large mining town of Broken Hill. 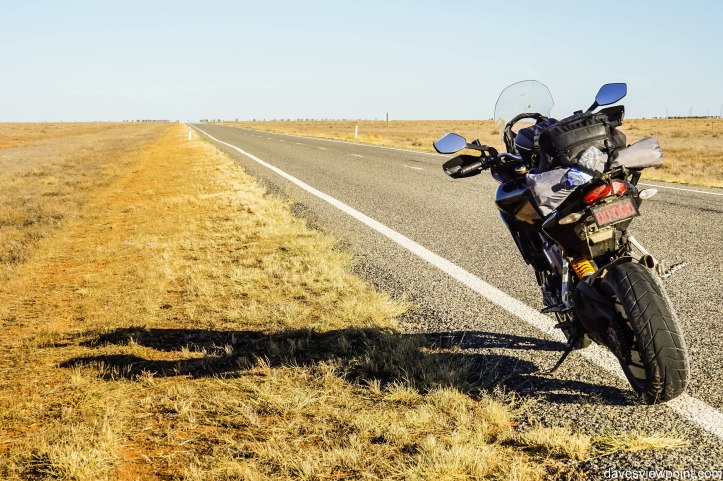 The road out of town from Broken Hill, going south towards Mildura.

You’re not really free until you’re free from trying to please everyone. This is one quote that I now try to live by. Life is far too short to care about whatever anybody else thinks. Ride that bike, explore different roads, rejuvenate your soul amongst the sceneries of nature and live free. Leave the past in the shadows of your previous self!

As I reach closer to the Victorian border, dusk falls upon me, and the ‘roos make their presence known in this unfenced territory. 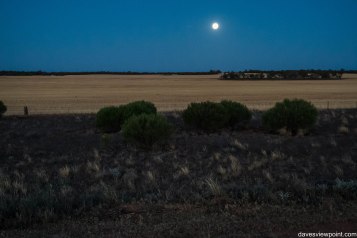 Running very low on petrol by the time I reach Wentworth, near the NSW/VIC border, but the station is closed. Hoping that I can make it to the Mildura town centre with just petrol fumes… 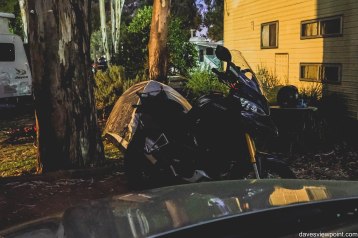 Finally make it to Mildura, but realised that all accommodation were filled up, thanks to the annual Mildura speed boat races.

…but thanks to purely good luck, I ran into this guy called Adam in the Buronga caravan park at midnight. I got to camp within the camping quarters of an extremely accommodating Adelaidean family and their extended families. Even offered some whole lot of beer, which really made my night! 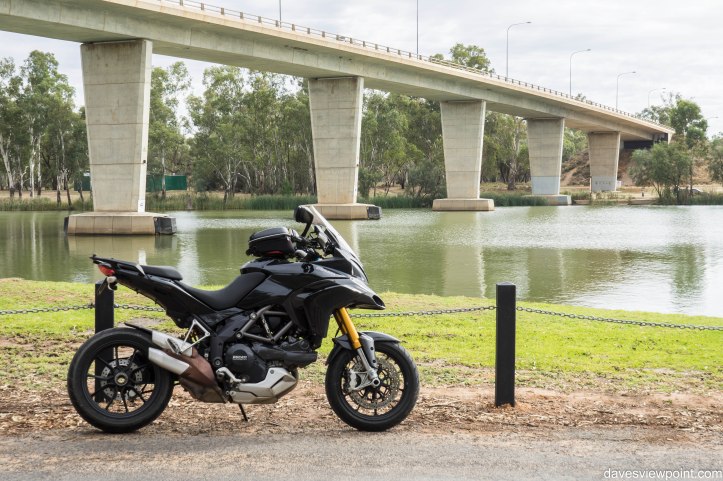 It was only when I got to spend a bit of time by the Murray River at Mildura, that I realised that people out in the regional areas of Australia are very open and naturally friendly. Must be something about having plenty of land and the lack of urban clutter. 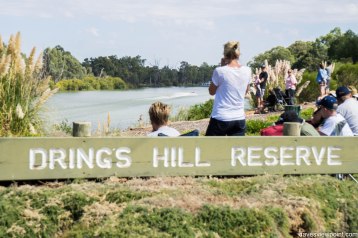 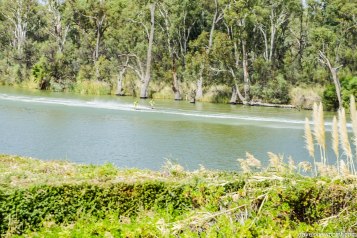 Spectating the inaugural “The Fastest Ski Race in the World”, known officially as the Mildura 100. People travel interstate to bask in this local attraction, and is lauded by the locals as the biggest event for them. If you’re a speed boat enthusiast, you’d love it!

Taking the back roads of Mildura, a place that is in the centre of the region known as ‘Sunraysia’, and is recognised as a major food bowl, providing almost all of Australia’s dried vine fruit and grapes, as well as other fresh produce and the specialised Murray River salt used in higher-quality Australian cuisine.

As I approached Balranald, I followed behind a pair of Harley’s, and actually got to have a good chat with them, who were on their way back to Sydney from Adelaide to complete the rest of their 24-hour Saddlesore 1600km Iron-Butt endurance ride. 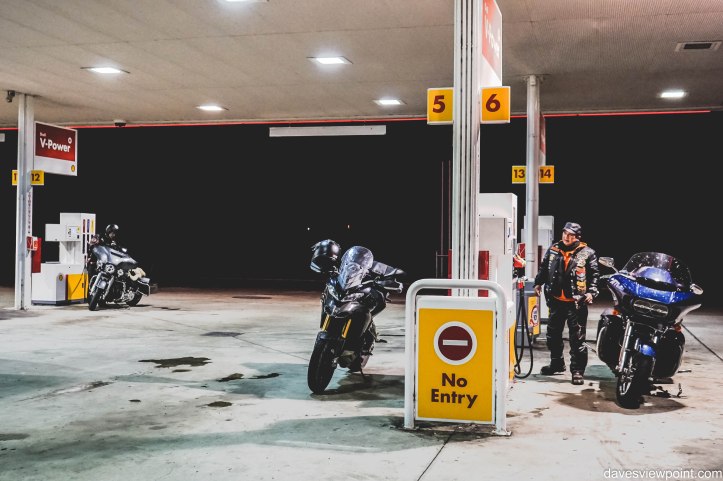 At just under 70 hours in total, I manage to complete over 2500kms. To put it in simple terms, it was like as though you’ve come straight out of hell and conquered Satan himself. Those endless open straights does something to your head that nothing else can achieve in a short time: put you down, ponder the validity of reason behind modern developments, meddle with thoughts of life’s purpose, and rise again to face life with a victorious courage.