Day 4: Live update – Odometer 47205km. Chasing that sunset, still buzzing from Eluveitie‘s gig at Adelaide last night, ‘Helvetios’ album on repeat. Still a mighty long way to go for my trip.. But, all is very well. Life is good.

Before heading to bed, I hit the only restaurant, for a lack of other terms, open in town at midnight. Ah, McDonalds.. a late-night haven for raging drunks, baggy-eyed students.. and travellers without a taste? I love bagging out all these fast food places but, when you become desperate for carbs in an attempt to get the stomach digesting for energy, food is still food. I wasn’t going to sleep with an empty stomach, after lasting a morning with just a sausage roll and afternoon with Tim Tams.

From what you’ve probably read out of my list of food expenses so far, you must think that I have a stomach of a pig’s rear end, and that’s probably more a fact than it being an untruth. My food choices have, up to this present time, have been just pure junk. I knew this and, combined with insufficient sleep, I was very conscious that was probably going to get really sick soon. Call it foolishness, irrationality or insanity, because there was only one thing in mind: Get to Perth, as soon as I can.

But that has to be done in a way that is sustainable. A crappy diet and a broken sleep pattern can only be sustainable for a few days at most, but this is what I’ve had to constantly endure to date, since leaving Sydney. I’ve again had the worst sleep. After eating, showering and sorting my files in my laptop, I slept at 3am, and inevitably had to get up by 9am so that I could check out of the hostel by 10am. I felt dead, and my schedule was again saying that I am 3 hours behind.

However, I couldn’t leave Adelaide without visiting Italian Motorcycles. There must have been a leakage from my clutch line because it was slowly losing pressure. For now, I could only identify that the clutch fluid was going rancid at an abnormally fast rate, so it had to go.

That was all done in 15 minutes, thanks to the help of Ian at Italian Motorcycles and his team. You might remember from my Uluru trip that this was the place that I obtained a brand new front wheel guard, and that was provided within days. Have I had gone into any other Ducati shop anywhere around Australia (Sydney and Melbourne included), I would have had to wait three weeks for parts to arrive from Italy. These guys went above and beyond to provide what I needed urgently, and they did so in a diligent manner. A fantastic shop.

And here is one thing that I have to say about motorcycle road trips: there will always be people out there, wanting to take away time away from you like a partner who wouldn’t let you go astray! 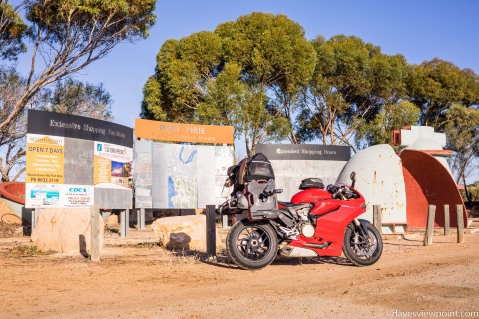 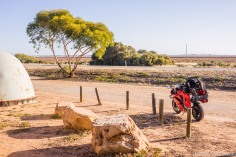 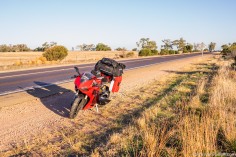 I’ve lost count as to how many people approached me to check out the bike’s setup, which I don’t mind at all. There’s nothing like having a good chat with other riders, travellers and generally curious people. I love that bit of camaraderie that helps me to feel that, although it being a solo trip, I’m not so alone and that there are others looking out for me.

But in such a trip, I really need to be in places at particular times. This was probably the ultimate downfall of this day’s trip. Half my day was spent dawdling in the city of Adelaide amongst some of the friendliest-ever people. If I had time to burn, I would have revelled in the atmosphere and take it all in. But this trip was not designed to be a pleasure cruise. This was a consequential lifeboat that I had to navigate across a remote country within a week. Yes, it was all self-imposed, but this was a mission that had to be done.

(To those who I met at Adelaide, please don’t be dismayed. I really did enjoy your company, and I am glad to have met you! 🙂 )

The region that is north of Adelaide, or more specifically the Port Augusta region, is known as ‘The Gateway to the Outback’. As I travel further into this South Australian interior, the landscape becomes more arid, dusty, rough and bare. I was well and truly leaving the domain of city life, and entering the dominion of Australia that is comparatively travelled by only a hardy few. 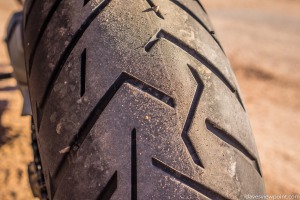 At the start of this whole trip, the bike had already had a little over 8000km done on the existing Pirelli Scorpion Trail II tyres. These are the same ones that I had written about a few months back, in the 38000km Tyre Change. By this point of the trip, the tyres had covered over 10000km.

I was beginning to doubt my rough estimation that my rear tyre tread would be sufficient enough for the trip to Perth. As seen in the photo, the tyre had just 1mm before the wear bars are reached. With a distance of around 2500km to cover, I needed to be able to depend fully on the remaining life of the tyre but the roads were turning coarser. Should I have changed my rear tyre back in Adelaide, or will it be enough to reach the Western Australian capital?

By the time I neared the Port Augusta region, the sun was beginning to set. This was both a beautiful and a distressing sight. Beautiful, because of how the mellow rays of an afternoon sun would cast a soft orange across the vast and desolate landscape. In contrast, it reminded me that I was crawling at an extremely slow pace: 5pm, 300km. This was nowhere near the planned 800km that I had originally wanted to do on this day, and the road past Port Augusta is absolute ‘roo territory at night. 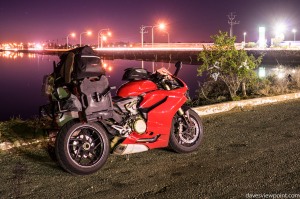 I arrived at Port Augusta by 6pm, and wondered if I had to settle down in town for the night. I tend to favour backpacker hostels for the sole reason that it’s dirt cheap. Another big reason is that I usually meet some great and/or interesting people in the accommodation. However, I couldn’t find any accommodation of this type in town.

So, anyway, hostels in general are fine and all, but Port Augusta ain’t really a touristy sort of town, and that’s probably why there ain’t any here. But there are a lot of motels, though they will greet you with a very industrial atmosphere, wherever you go out here. This is indicative from what I saw, from past experience, the kind of people that were staying in the motels: many labour workers working away from their homes. 50% of carbon emissions, from electricity generation, in South Australia, come from the Port Augusta region, so it’s a very significant industrial region.

In the end, I decided to resume my way towards Kimba, which was another 150km further up. I did not want to lose out too much on the total travelled distance for the trip, because there was far too much to catch up on. I could only blame myself for setting up such an unrealistic trip schedule. 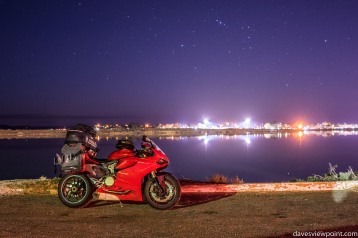 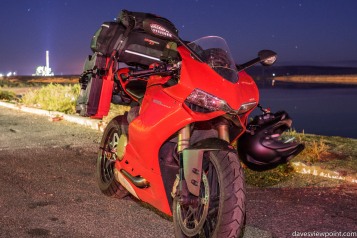 Equipped with a pack of muesli bars and a full tank of water in my 7.5 litre Rotopax, I headed my way back on the road. The full moon graced its pale light across the highways of an otherwise pitch-black open country.

But travelling at night is not the same as riding in the day. I was certainly overly optimistic of the estimated travel time to Kimba, calculated on Google Maps as being 1 hour and 30 minutes from Port Augusta. It sounded simple enough. Just a nice evening cruise to the next town, right?

The main arterial through Port Augusta directly leads to the west. Once you are out of town, this road becomes the Eyre Highway. I was expecting some dramatic wildlife activity at night, especially as the roadkill count seemed to outstrip the number of vehicles on the road. My eyes were on the lookout for kangaroos and wombats but the bike’s headlights are just terrible for night country riding.

I ended up doing the trip in 3 hours, essentially doubling the ETA. I slowed down to around 70-80kmh because I felt that this was a good speed for me to be travelling, allowing for emergency stops in the case that I approach a dazzled animal in my path. In reality, this was probably still too dangerous. It only takes a wombat on the loose to cause a major single-vehicle accident. These things are like boulders on the road that, apparently, has the potential to also flip cars. Small but mighty creatures, they are.

Now, it wasn’t quite the rock ‘n roll sort of reception that I would have expected to conclude a potentially diabolical, self-imposed mission in some very distant drug-induced dream of a movie-like scenario. Nevertheless, it was good to have arrived in Kimba with all limbs still attached and no foreign animal parts dangling off the bike, because I was dying to sleep.

Arriving at 10:30pm in Kimba meant that there was not another soul in town. No house lights on, but only a few dimly-lit street lamps up in the distance from where I stood. Apart from the bleats of a few sheep, there was a deafening silence. 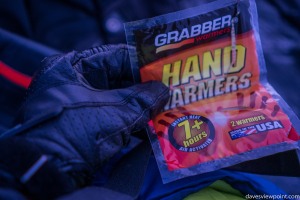 I’ve had plenty of practice, setting up my tent in various situations, so setting up in the dark without much ambient lighting was still a piece of cake. But I wasn’t quite prepared for the huge drop in temperature to just 6°C, and the hard gravel surfaces on which I had to sleep.

I would say that my camp equipment was more suited for a warmer season. The lack of any form of floor liner in my tent was a significant omission. Sure, the sleeping bag was rated for sub-zero temperatures, but the bare dirt underneath the tent act like a bed of ice, and the rocks accompanying the ground were like a violent massaging pad. Sure, I could just use the sleeping bag properly by only letting the face out for the sake of breathing, but I tend to move around a lot in my sleep.

So, I whipped out the instant hand warmer that was given to me by Mark, a room mate who I met at the Apollo Bay hostel in Day 2. I think it helped for a bit, but I reckon you can get the same effect by putting your hands in your groin. I.e. it was useful only as a reminder of how bloody cold it was.

I’ve had far better camping experiences. Hell, I didn’t even know where exactly I was sleeping, but the dirt patch beside the kerb of the Eyre Highway apparently was good enough to my bleary-eyed self. The body’s exigency to shut itself down meant that I urgently needed to settle for sleep. Tiredness and fatigue infiltrates rationality and I am nothing more than a zombie without logic or sense in search of a refuge. 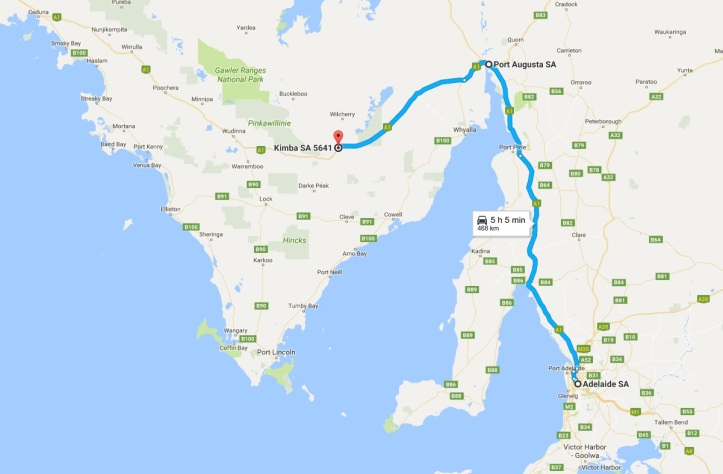