Day 23: Live update – Odometer 60167km. Sprinting my way down back to the NSW border. Feeling a little blue at the moment, because I am basically missing out on the best parts of the coastline and hinterland of Queensland. It’s a long straight highway from here for me… but Queensland, I will be back. Mark my words.

With just three days remaining for the trip at this point, I had at least 2000km left until I returned to Sydney. At this point, I didn’t really have much motivation to explore and couldn’t bother myself enough to take sufficient photos, and just wanted to keep riding. With this in mind, any scenic coastal detours were out of the equation, so my time was mostly restricted to the main highway section.

My day on the road starting at dawn, it was an opportunity for me to witness the birth of a new morning. I’ve had plenty of opportunities to capture the many sunsets over the past weeks, particularly when I was in Western Australia where I was allured by the ocean backdrop. But I had not yet taken the time to admire a proper sunrise, mainly due to my consistent late nights on the road which made sustainable early starts unfeasible.

Early mornings were now an integral part of my final journey back home, to maximise daylight hours and thereby extending the distance that I could cover safely in a day. Sunrises no longer symbolised a time to wake up. Rather, it was the end of the first part of my morning ride which preceded another massive day on the road. 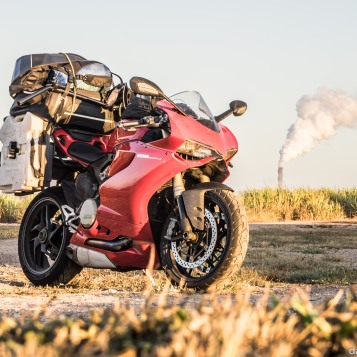 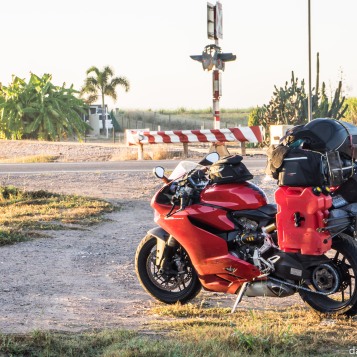 Between the Townsville and Mackay route, keep your eyes peeled out for a few examples of Australia’s Big Things. Aussies have a penchant for big things, whether it be in the form of extravagant calories and excessive horsepower, so it’s only natural to have many dozens of larger-than-life sculptures that represent the very things that Australians love. 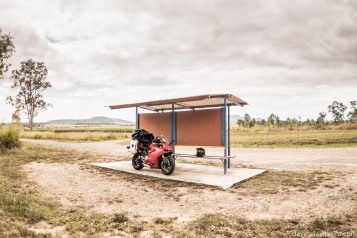 Afternoon nap underneath a bus shelter, on the Bruce Highway between the Proserpine and Mackay section. The many hundreds of kilometres of highways become very tiring, especially on a bike with low handle bars and a hard seat that provides no mercy to your backside. It had now come to the point that the lining of my underpants causes an irritation, and simply sitting on the bike is an ordeal in itself.

Fields of sugar cane dominate the rural plains surrounding Mackay. In fact, this sort of landscape is quite widespread around the major regional centres of coastal Queensland. Sugar cane is commonly grown across a great region that extends from Cairns and Townsville, and all the way down to Bundaberg to the south. Queensland is the major source of Australian sugar at 95% of the national crop output, with the remaining sourced from northern New South Wales.

The pressure of the hydraulic clutch had weakened over the past week since replacing the clutch fluid at Darwin. Nothing that a quick bleeding won’t fix to release any air in the lines, but it was a continuing issue. Later on, I found out that the source of the air leakage was from a loosened valve connection, which was just a matter of tightening a bolt.

The night became wearisome by the time I passed the Rockhampton region. Without much thought, I decided to settle in for a night out in the open, on a park bench outside an isolated servo. There’s not much that’s required for you to sleep when you’re really tired. All that’s really needed to knock yourself out for the night is a surface to lay yourself on, a sleeping bag to keep you warm and the menacing and watchful stare of a motorcycle to guard you safe in the dark.