Day 24: Live update – Odometer 60777km. A good morning from the Sunshine State. Currently 12°C, which is still better than the 7°C temperature before sunrise, but the weather is quickly warming up. Enjoy your Sunday!

Day 24 had finally arrived, which came both as a relief and grief. This day marked the final day of touring before I spent the absolute last day to travel back home to Sydney from my planned overnight stopover at the Gold Coast, and thereby officially concluding my 3.5 week leave from work.

A relief, because this trip had been a constant battle between the forces of body-crippling fatigue and the merciless demand of extensive riding distances, but also grief in a way because it meant that I had to return to the reality of living my actual life of working to pay off bills through the daily grind. Not that working and tending to responsibilities that come with a job is all that bad, but travelling to new places and letting the soul nourish itself amongst the surroundings of pure nature is something that not even a therapeutic session can totally mimic.

With an estimated 600km remaining on the road to Brisbane, the day actually seemed like a relatively easy task, given that I had clocked over 900km the day before this one. However, the urban traffic of the Brisbane and Gold Coast areas will require me to have as much time and effort for me to exert into the day’s progress, if not even with more diligence and care. As I’ve found previously during my brief time at Perth, a motorcyclist’s fate can be dependent on just one careless driver. How many drivers are there in Brisbane? Most certainly more than the rest of regional Queensland combined. Riding in the city is an experience that is potentially wrought with greater risks. 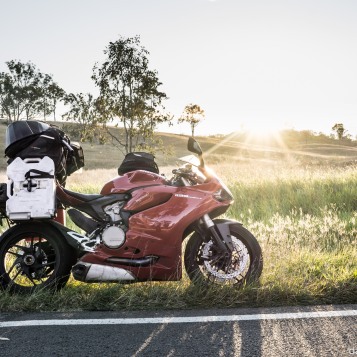 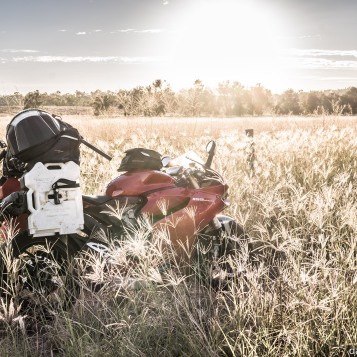 As morning grew, the sunrise illuminated the golden fields of Gin Gin. The ambient temperature warmed up quickly, coinciding with the raging glow of the rising Queensland sun. Nothing much beats the sweetness of the early day breeze of the country, birds chirping away, shrubs gently swaying with the air, and the anticipation of a full day waiting for your move. 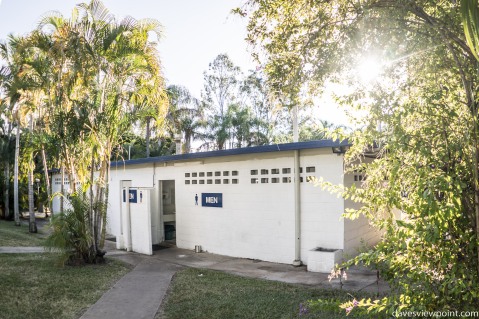 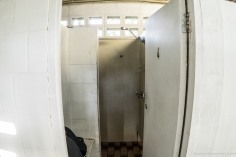 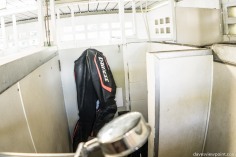 Arriving at the town of Gin Gin, I stopped for petrol and noticed that there was an amenity block behind it. Grasping the moment by its neck, I head off for a much-needed morning shower whilst I plug in all my electronics and depleted battery banks for an urgent recharge. Without these heavenly sanctuaries at my disposal on the open road, this road trip would have been even more of a chore. 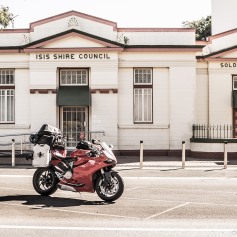 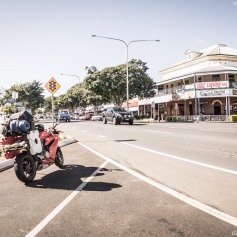 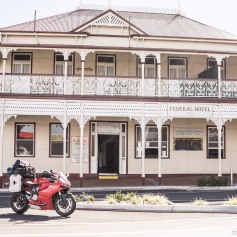 A quaint country town called Childers sits on the midpoint between Rockhampton to its north and Brisbane to the south. It’s not difficult to find a place to eat here, with its old pubs and small restaurants that are visibly located on the main commercial strip. A significant sugar producer since its foundation in the 19th century, the town has retained many of its historic roots which have become a spruiking point for its tourism, great for photographers with time on hand who love both the slow-paced atmosphere of a traditional country town and the freedom of wide open fields of greenery. 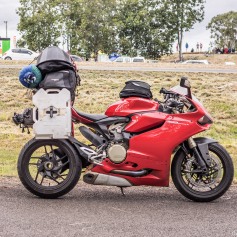 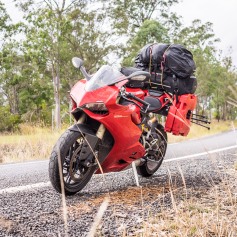 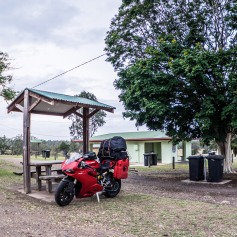 As I progressed through Gympie in the afternoon, the dreaded vision of thick grey clouds formed under the diminishing blue skies. Checking the weather forecast on my mobile app, I was looking forward to a serious drench to greet me at Brisbane and the Gold Coast. Thankfully, I had a great set of wet-weather layers, the jacket from which I had bought from Aldi supermarket working better than some branded gear that I’ve tried in the past. For pants, it was the Dririder ones, cheap but still functional, that I had bought in Mornington down in Victoria to replace the Aldi pants that I had lost somewhere on the Hume Highway on the way to Melbourne. Never underestimate cheap gear!

Stopping by within the CBD area of Brisbane, not knowing exactly where to go, a local resident by the name of Matt on his 50cc scooter introduced himself to me, and went on with the usual moto talk that I’ve gone through countless times throughout this trip. However, this encounter was made different, in that he willingly offered to guide me around the city in the pouring rain, for which I was hugely grateful, because I had absolutely no idea of where to go for a good vantage point from where I could capture a panoramic view of the whole city.

Under the pitter patter of rain showers, I was led to an eastern part of the city, where I enjoyed possibly the best view that Brisbane has got to offer. Although the rain hindered my photography efforts, I spent a brief time enjoying the night view of this brilliant city that residents have affectionately nicknamed ‘Bris Vegas’. I’ve checked out the origins of this term and, while some claim that it’s an ironic term to highlight the bland and crass culture of the city (to which, of course, zealous residents will strongly object), I see it as being a place where people who like the city will absolutely love, and others will overlook it. I don’t necessarily see that as a negative. After all, we don’t need another darn Sydney or Melbourne in Australia; one of each is enough. Brisbane, you’re pretty cool in my eyes, so please stay the way you are!

It would have been a logical decision to have spent the night at Brisbane, but I needed to finish off the day at the Gold Coast so that my next day back home won’t end in catastrophic failure. The road was dreadfully daunting out of Brisbane. Although I took the simple motorway route, it was not made easy by the darkness and the pounding rain. You also can’t forget the fact that urban drivers somehow lose a part of their common sense and driving skills. In ways, the relatively short ride to the Gold Coast seemed much longer than it really was, using all my defensive riding knowledge to anticipate and counter any unexpected manoeuvres of surrounding motorists. 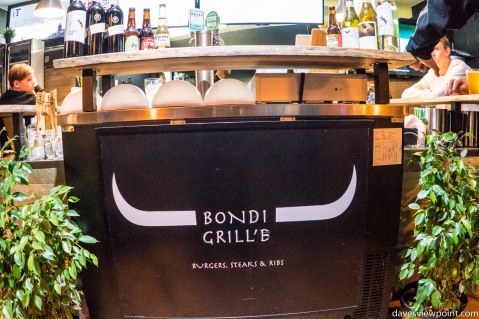 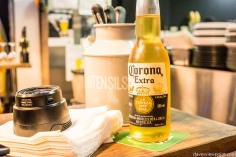 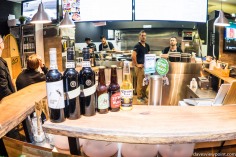 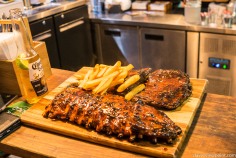 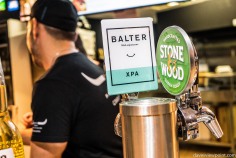 I made it to Coolangatta, where my good friend and former head chef Ricardo was waiting gleefully for my arrival at his steak and rib eatery, Bondi Grill’e. If there was any ultimate meal that I could have wished for, it would be a delectable board of pork, beef and lamb goodness; great food that this eatery is very, very good at making. It indeed at the time felt like the most beautiful gastronomic experience.

My choice of beer, apart from the Corona that was hastily ordered, was the locally produced Balter XPA, a beer brewery that was recently spearheaded by local surfing legends Mick Fanning and Josh Kerr, along with other surfing mates. A floral finish, and a pleasantly fresh projection that makes it a summery alcoholic choice. I think it will have a universal appeal among beer drinkers. But, really, after yet another big day on the road, any beer was good enough in my situation. Beggars can’t be choosers; just drink what’s in front of you! 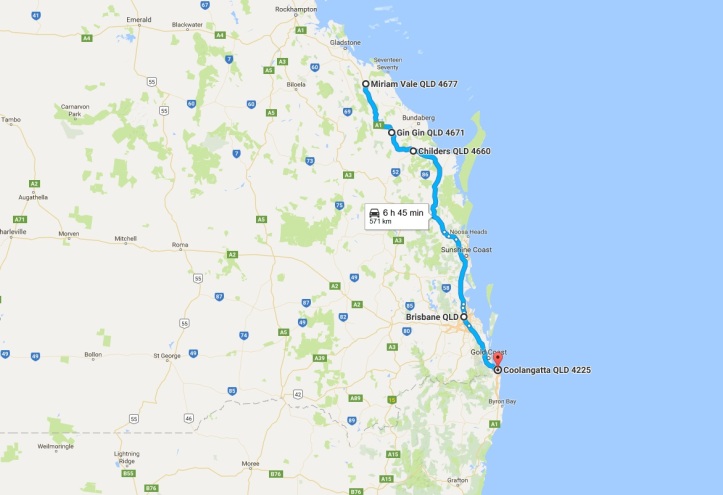