Day 3: Spent last night at my favourite outback town, Lightning Ridge. Now at Dirranbandi for my lunch break where I’ve managed to find the only open servo so far for today in outback Queensland. Very glad to say the least. Had I arrived a little later, I would have been stuck here for the night as headwinds are resulting in a fuel consumption average of 2.7L/100km and 3.7L already used in my tank. If consumption remained within this trend for the 100km to the next town, I probably wouldn’t make it. Great to be back in this tiny country town where I last travelled on my Panigale at exactly this time last year. Always great to be in the presence of friendly service attendants in the outback; service with a smile.

The sun was up way before I woke up. Getting up at 8am, I was well past my planned wake-up time upon sparrow’s fart. I had to get a move on to the state border as soon as I can to maximise my daylight hours. Minutes went by as the temperature simultaneously crept up. It was crucial that had as much time as I could afford in a day to exploit, because the lower sustainable highway speed of the Grom consequently means that I would need much more time to cover as much distance as a proper, full-size bike.

The general rule that I follow when travelling on the Grom is to go by the GPS’s ETA, and then add a further 30% to the travel time. My aim for the day was to get to Texas, a distance of around 500km from Lightning Ridge. This would be a pleasant day cruise on a bike like my Panigale. On the Grom, this sort of distance is highly demanding to say the least.

Across windy conditions, I made it to the Queensland border. Riding against headwinds, it was a struggle of maintaining pace on the highway with the available outright power of the Grom. The combination of this and the weight of the luggage was taking a toll on the overall fuel economy. Covering just under 70km so far on the current tank of fuel, my fuel gauge was already down to its halfway point. 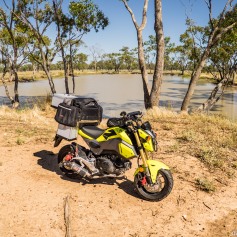 A small dam in Lightning Ridge.

The first Queensland town, just 4km across the state border on the Castlereagh Highway, is Hebel. According to the census, the town had a population of 149 in 2006. this is a tiny town with a pub and a cafe across the road. Nothing at all were open on this day, due to the Christmas holiday period, so there was no way to fill up on petrol via the pub’s sole petrol pump. The next petrol station from Hebel was 67km north at Dirranbandi. The most I have covered with one whole tank on the Grom was around 220km, but that’s without the extra luggage load and the Having already done over 70km, it was crucial for me to refill at Dirranbandi as the next servo would be at St George, a further 100km away.

Making it up to Dirranbandi, I was thankful that the petrol station was still open. The shop was running on restricted hours for the festive season. Had I been an hour late, the shop would have closed for the day, so I was lucky to have made it here on time to fill up both the petrol tank and my own empty stomach. A Southern-style chicken burger and chips for a decent lunch time was had before moving on to the next town.

Dirranbandi has a population of under 800 people. As with other towns in this part of Queensland, cotton is a major industry, so it is a town that relies on seasonal labour during the harvesting period, which is around the Autumn season between March and May. Dirranbandi was the very last destination of the last operational mail train in the late 1910s. Its rail history is imbedded into the town’s character, as evident by the original rail facilities that are preserved as a part of the town’s historic identity

Being a region that borders on to deserts, South West Queensland is constantly battling against dry conditions. The dominant feature of the landscape is the vast expanse of dry grasslands, so this area is always at risk of grass fires. Cactus plants are littered across these lifeless plains. The cactus are persistent things, not caring about its surroundings. They live on their own accord, and live to the fullest, thriving in places where all else wither and die. 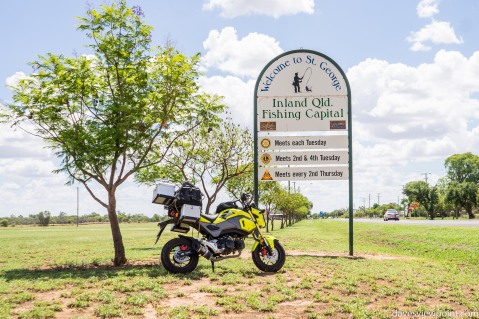 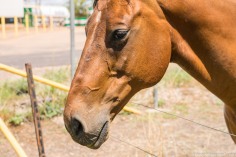 Next significant town after Dirranbandi was St George. This is the fertile region of the Balonne Shire and, with a population of over 2500 people, it is the largest town in this part of Queensland. Fishing is a big thing here, as well as other water activities, thanks to its river. The Balonne River is the driving force behind the town’s economy, supporting both recreational and agricultural activities. St George’s cotton industry relies on irrigation that derives its supply from this river.

At this point of the day, the sun was shining at its utmost brightest and hottest. With temperatures at around the 40°C mark with dark-coloured gear on, the best thing to do was to avoid stopping and continue on with my ride. But stopping over for a few clicks on the camera is a crucial aspect of my travels. Many of my marathon runs end up being a blur in my memory, so photos help with both documenting my journey and also for me to relive the experiences as I flick through the snaps. As they say, “pics or it didn’t happen”.

Ghost towns and sparsely populated villages are a common sight in regional Australia. Weengallon, on the Barwon Highway, the route between St George and Goondiwindi, is a tiny place. I don’t even think it can actually be classified even as a town, as its central location consists of three buildings; a shed, freestanding house and a town hall. Blink, and you’ll miss the town. Various sources claim a permanent population of anywhere between 1 to up to 117 residents. The area does not have any mobile reception at all. At the very least, it worked out very well as a rest area, where I had a much-needed afternoon nap underneath a roadside canopy.

The afternoon sun was setting, and I still had a few hundred kilometres to go until my final destination. The way that the sun shined across the golden fields, however, was unmissable. Taking some time to appreciate the lovely scenery, the most beautiful thing about it is that it was just my own self with these thoughts. I love being out in the open like this, with nobody else around you. Nobody is there to influence your feelings, nobody is there to meddle with your mood; it’s just you. Much like riding alone on a motorcycle, you need time on your own. Everybody does. 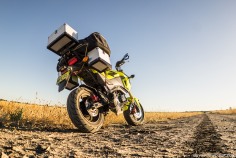 Arriving at Goondiwindi past 8pm, I was pretty much knackered and battered. Sitting your arse all day on the solid-hard stock seat of the Grom is no laughing matter. The weather was still warm, remaining at 30°C, which meant that I had the company of a zillion mozzies that were waiting to devour an unsuspecting prey. Before the shops closed, I managed to get myself a fish n’ chip dinner, filling up that groaning stomach with the goodness of oily carbs. Washing it down with a sugary energy drink, I was ready once again to take on the road. I still had some fight inside of me to ride into the night, to attain the day’s goal of reaching the town of Texas.

Despite the complete darkness, I proceeded towards Texas. The lure of the starry night could not be resisted. The best thing about being on the road at night is the chance to capture the beautiful night sky. This sort of clarity is difficult to achieve unless you are way out of the city. In my every day life, the time to ride far out late at night is near-impossible due to my 7-day work schedule. I try to make the most of these opportunities when I am on a road trip like this.

There were so many night photo opportunities as the road to Texas became shorter, but a slight fear of the dark unsettled my inner conscience. Juggling between deciding whether or not it was the right place to stop, the gripping thought that there may be something lurking out there in the wild overrode my desire to stop for a snap. Assuming that there was that one-in-a-million chance that there was something that is unseen and that cannot be identified until the very last second before the clutches of an evil entity consumed my very existence, I ended up totally regretting it later on. 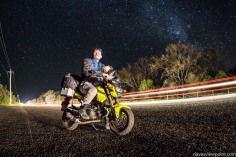 Midnight ticked on the clock as I approached the town’s edge of Texas. There is a moment of absolute serenity and comfort in the midst of complete darkness when fear is not even a second thought. Star trails lining up perfectly along the direction of the isolated and rustic country road, it was an imagery that belonged to a poetic novel.

Eventually after hours of crawling cautiously on the road to avoid wildlife, I reached the centre of Texas. I ended the day’s ride with a hot shower in the public bathroom, within the heart of the sleeping town, before scoping out for a tent site to lay my head until the morning arrived.

I long for more of these sort of days in my life; that feeling of satisfaction, of when you’ve just completed a massive day on the bike, and ready to just drop everything on the ground, have a steaming hot shower in a public bathroom, eat some crappy food that you have stashed under all your gear, and call it a night inside your portable home that you call a tent that you’ve just pitched in the middle of nowhere. Deadset, the Grom doesn’t make light of the interstate touring endeavours, and strewth it takes a hell of a time to get anywhere, but that somehow makes it more an enticing adventure worth living up.