Day 4: My face says it all.. You might think it’s all fun and games with the Grom, but this is a serious adventure bike for serious riders.. Only if you wish for it to be

.. Crossing the river border to Texas, a small country town on the north side of the QLD/NSW state border. I will now be heading to the Gold Coast before returning home to Sydney tomorrow.. but it will take some time on this bike. A very long time, actually.

Last night’s ride from Goondiwindi to Texas took a toll on my morning as I got up at 8:30am instead of the 7am that I planned. But it was near-impossible for me to wake up any earlier when I had hit the hay at 2am last night after that long ride. Dozens of alarm bells from the phone didn’t catch my attention one bit, but there was no choice but to get out of the tent as it transformed into an oven due to the increasing heat of the Queensland sun. 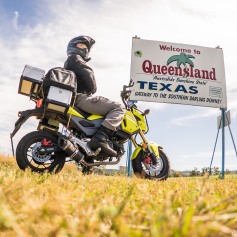 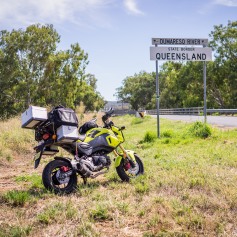 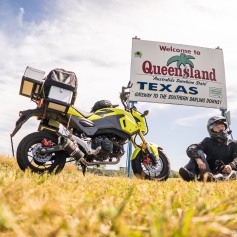 Texas was a particular destination that I had always wanted to visit, alongside Lightning Ridge, but I have not had an opportunity to pass through this place until this time with the Grom. The novelty factor of the town name was the main attraction for me. As with the dramatic name of ‘Lightning Ridge’, the bold name derived from the southern US state was enough reason for me to make the effort to visit.

The origin of the name harks back from when the land around today’s Texas was the centre of a territorial dispute between owners and squatters. The American state of Texas was historically also similarly one where the US and Mexico were in disagreement of the southern borders. Once the Australian land borders were determined, the town was named as Texas in reference to the American dispute.

Texas is a small town with 1000 residents on the southern border of Queensland. Bordered to its south by the Dumaresq River, it is just a road bridge away from New South Wales. With such a clean and accessible river, I went for a cheeky water crossing across a part of the river. The shore of the river is lined with pebbles and jagged stones over a sandy terrain, so it is relatively stable for any dedicated dirt bike to ride across. The Grom has tiny wheels, and I still had the el cheapo Thai-made stock tyres, so there weren’t any serious deep water crossings involved, but it’s always great fun to be splashing around in water, especially under the searing summer sun! 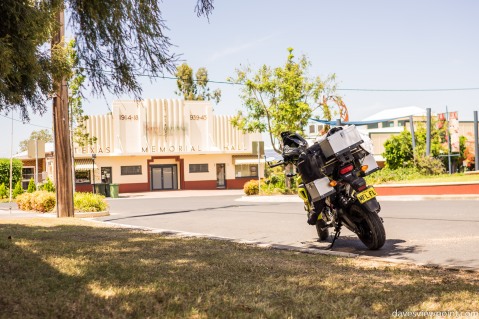 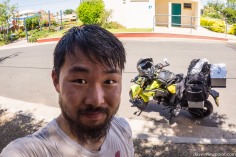 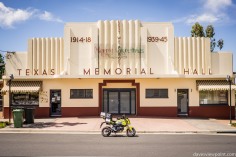 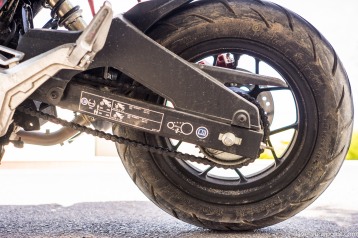 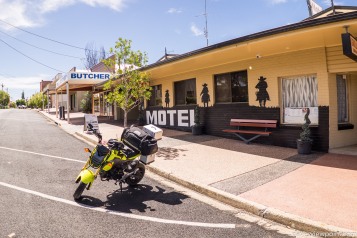 Texas is a quaint town with numerous cultural references to the universally recognised Texas in the US. Cowboy-themed illustrations and business logos appear numerously in the country town’s main strip. Apart from this, it is a small town that is typically found in many other parts of country Australia. There’s not that much to do, but it is still a pleasant stop in between bigger destinations, either for a lunch break or a camp night. A notable positive is that the whole town is remarkably clean, so I recommend it for any interstate visitor on the road. 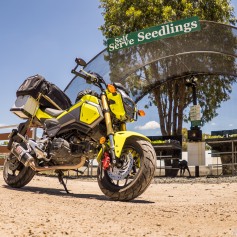 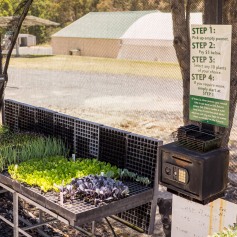 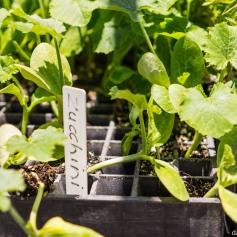 After spending my morning in Texas, I progressed my way towards Stanthorpe as my first destination on the way to Brisbane, Queensland’s capital. Steep hills and winding roads characterise the Texas-Stanthorpe Road that links the two namesake’s towns. The Grom struggled to keep up with the speed limit the whole time as I tried to wring out every extra bit of power that I could extract out of its willing but breathless 125cc engine. On a suitably powerful touring bike, this road would be extremely involving, with a speed limit between 80-100km/h and minimal traffic. On the Grom, I was maximising the throttle whilst lazily looking at the landscape; I could just sit there with my right hand on the throttle and the left hand on my chin, out of restless boredom. 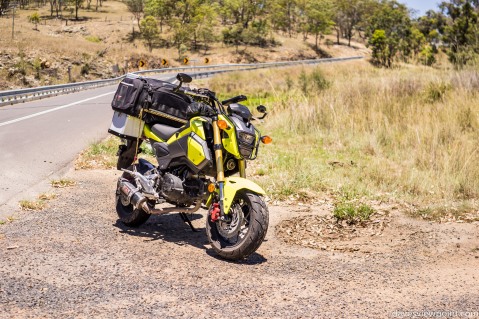 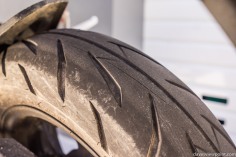 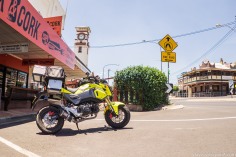 Warwick was my next stop after Stanthorpe. A large country town compared to the towns further inland, with over 15000 in its population record, it is a major administrative centre for the surrounding agricultural district. The Warwick War Memorial is a significant feature of the town, being built in 1923. Part of the Queensland Heritage Register, the gates of the memorial especially is a prominent part of the garden. Its hedge-lined parkland creeping into your field of vision, shouting for attention and craving a visit. Much like that photobombing uncle, who always wants to be in every single family photo, it cannot be missed.

The A84-238 Canberra Bomber in Willowbank, on the Cunningham Highway, is a military aircraft used by the RAAF during the Vietnam War. It’s first flight was in 1956, then starting its life in warfare in 1969 as part of the US Air Force in the 35th Tactical Fighter Wing, before being returned to Australia in 1971, sold to the South East Asia Museum in 1985, before being sold off to the current caravan park owners just a year later. The plane is now in a deteriorated state due to it being constantly exposed out in the elements without proper maintenance. Despite this, it’s always a welcome feature to have such historical objects out in full view for the public to freely observe in the countryside.

The slow-paced nature of touring on the Grom leads you to underestimate the amount of time that you had already spent. Having done just 160km by 2pm, I was far behind my schedule of making it to Brisbane by noon. I decided to push on and avoid any unnecessary stops, save for fuel, so that I could make it to Brisbane by that afternoon. 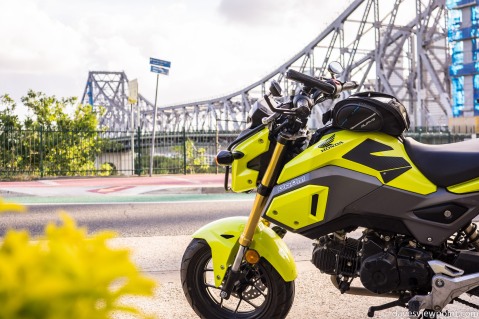 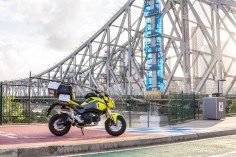 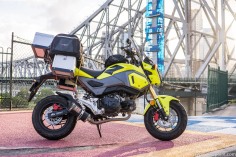 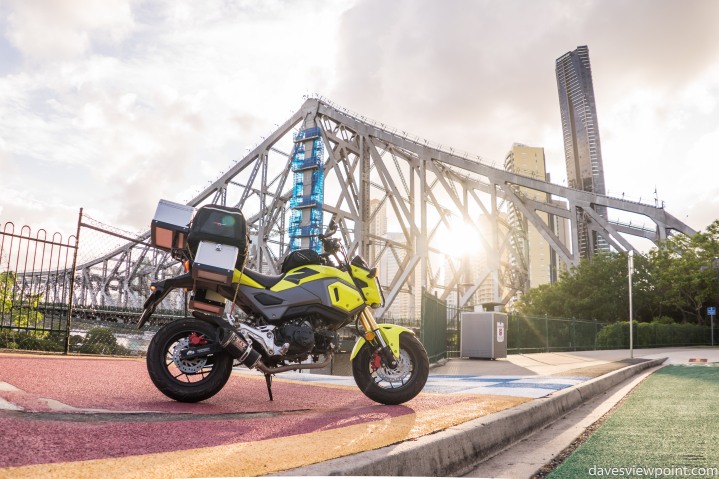 To be frank, I still don’t really know that much about Brisbane and where to go for good views, but the Storey Bridge and the Brisbane River below it has always been a standout feature for everyone who’s visited this city. I didn’t have long to spend at Brisbane as I had to continue down to the Gold Coast for the evening. To save my time, I rode to the same lookout at the southern part of Fortitude Valley, as shown by Matt when I last visited Brisbane as part of my trip around Australia on the Panigale. Due to the rain when I previously visited, I couldn’t get any proper photos of the CBD, so I was lucky to have the weather on my side this afternoon. 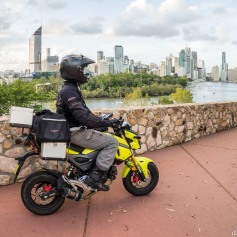 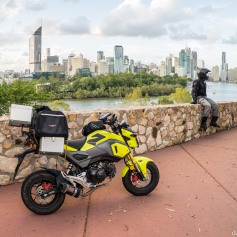 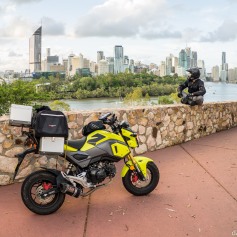 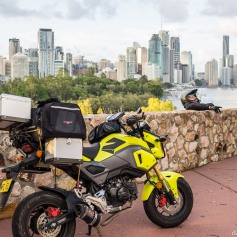 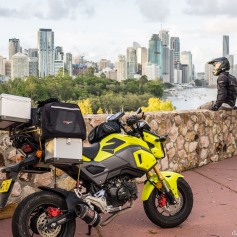 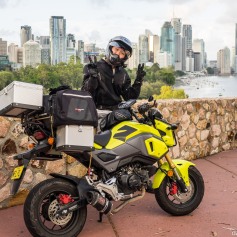 Gold Coast was my next stop for the afternoon that was gradually turning to evening. My intent to take one last look at the Brisbane skyline somehow lead me to a different viewpoint where, to this day, I can’t exactly figure out its specific location. It was the exact sort of landscape that I had wanted to capture of the Queensland capital. I guess stoked is one way to put it, as I momentarily shifted into a selfie whore with a lack of shutter restraint, snapping up repetitive photos from the same angle. And I don’t regret it at all!

Once I had arrived at the Gold Coast area, I was damn starving by this time. As you might be familiar by now, my eating routine is almost non-existent, as my zeal for kilometres override any attention to my dietary needs. Bondi Grill’e at Coolangatta has now become my regular eatery every time I visit the Gold Coast, to the point that it’s now my compulsory stop to say ‘hi’ to my friends in the shop. The ribs and burgers there are absolutely fantastic. I’d ride back up to the Gold Coast, just for another dish! 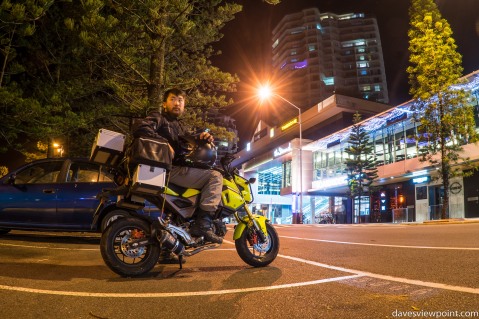 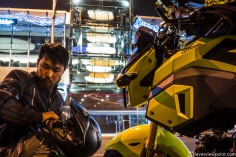 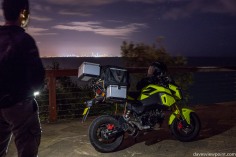 I guess I did have too much of a good time at the restaurant, because it was too late to hit the road towards Byron Bay. My eyelids grew heavy, and my stomach was diverting all my energy to digest all that meaty goodness from the ribs. The clock was a tick away from 10pm and shops were closing. It was clear that it was a more feasible idea to stay the night in the area until the next morning. That’s literally what I did when I scoped the coastal parks for an isolated area with a suitable bench that I could lie down on. Resting my eyes, lying on a cliff-top park bench overlooking the lit-up cityscape of Gold Coast, I calmly and patiently wait for the rising morning sun to continue on with another day on the road. 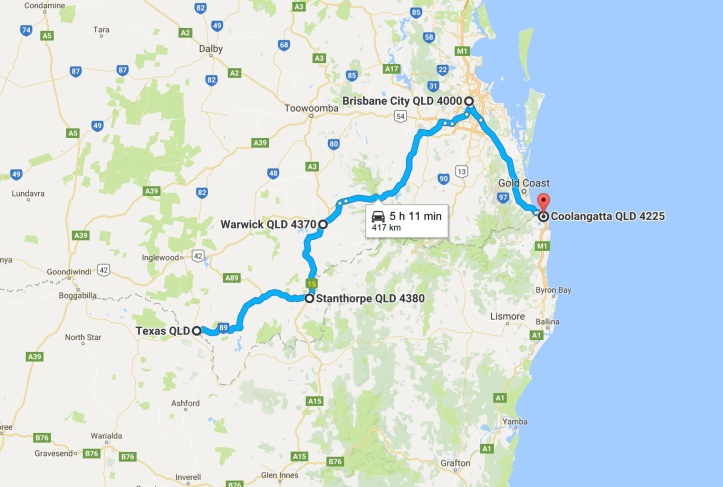