Africa Twin Across The Outback 2017: Introduction

The neat commuter Africa Twin finally gets a trip of its own! In contrast to my previous ‘touring’ bikes, which were the 1199 Panigale and the little Honda Grom, it’s about time that I rode on a purpose-built motorcycle to do my road trips across Australia, so this was an exciting opportunity to exploit its potential. However, I later found that the bike was much more capable of what I could handle. Consequently, it was obvious that I was the weakest link in the whole adventure.

Travelling the open roads of Australia on a large adventure bike; sounds like more of the same, but on a more comfortable bike, right? Well, that’s what I had initially thought. I was foolish to assume that this would be an easier mission than what I had been through in the past two years, because I deliberately made sure that I will have a difficult time. To cut a potentially long story short for now, I literally pointed on a random location on the map, which happened to be Alice Springs, and decided that I will take the shortest route possible to reach the destination. However, the shortest route is not necessarily the easiest or fastest route; quite the complete opposite in reality when dealing with the unsealed tracks of the arid Aussie Outback. 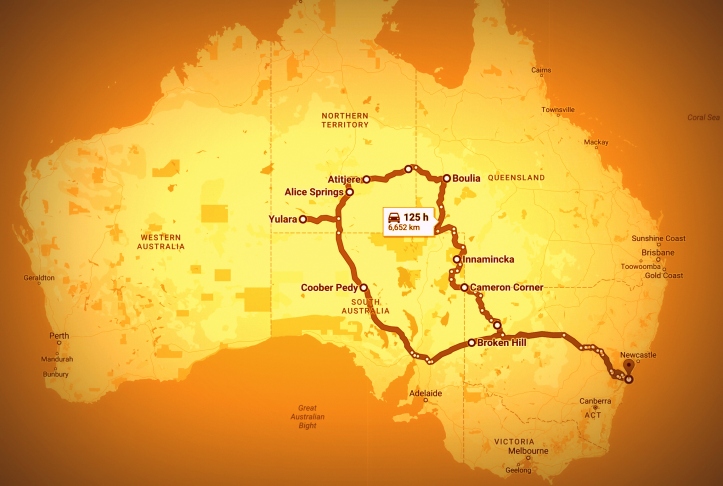 A recount of each day of the 14-day journey of the central regions of Australia on the Honda Africa Twin CRF1000L will be published over the next coming weeks, where you will read about what I had done well and, of course, the parts that I had absolutely failed to complete gracefully. Being a less-than-competent rider on unsealed surfaces, life and death scenarios were constantly been thrown relentlessly, challenging me to hone my existing skills, and learning new techniques on the road to get myself back home safely.

Below are some quick facts about the road trip!

Below are the photos from each day, which were posted live at the time on Facebook and Instagram.

.. However, it would have been great if I didn’t drop the bike in my own garage. Very damaging to my overall confidence

Day 1: Live update – Odometer 14252km. Currently in Narromine. I’ve never ridden the Africa Twin fully laden before until this trip, and boy does the additional weight make a huge difference to the bike’s dynamics. Taking it easy for now, especially after the earlier drop in my own garage! Loving the fresh air out here.. It’s been a long time coming, after a year of work, work and work!

Day 2: Live update – Odometer 14875km. White Cliffs, an opal mining town that I had visited 2 years ago on the 1199. Progress has been a little slower than I have anticipated. I thought that by getting a proper touring bike that I’d eat up more kays than the other less suitable bikes I’ve toured on, but I was wrong

Day 3: Update from approx 5pm – Odometer 15521km. Finally made it to the tiny town of Innamincka, in outback South Australia, via the very sandy Old Strzelecki Track in the dark. Most difficult day that I’ve experienced ever as a motorcyclist. I’ve asked for an adventure, but I got thrown more than I was prepared to do. I’ve now dropped the Africa Twin three times so far out here. Glad to have made it here in this little town…

Day 4: Update from yesterday evening – Odometer 15681km. Don’t worry, I am still alive. There was no reception out in the remote Coongie Lakes region. A very sandy region, the strong headwinds were really taking a huge toll on both my mental and physical state. I dropped the bike again yesterday, so I just decided to call it a day with barely over 100km clocked. I was so glad that I was within metres to a trio of grey nomads who’ve already set up camp from where I stacked it. A very friendly bunch, I was so happy to spend my night here!

Day 5: Live update – Odometer 15982km. What an incredible day! Got bogged belly-deep in loose sand as I was climbing up a hill at Walkers Crossing (see my photo comment for a small insight). Not keen on withering to death in the middle of nowhere without another soul in sight, I fought against the odds of fatigue and the outdoor elements to drag my way out to freedom! I am now at the Big Red, west of Birdsville QLD, which is the first of over 1100 sand dunes that make up the Simpson Desert region. Observing the sunset hue from the top of the massive sand dune to end an adventurous day was much akin to the concluding scene of a novel. Magnificent. Anyway, here’s my cringe-worthy first (and probably last) dab at the Big Red. Rate my dab!

Day 6: Live update – Odometer 16380km. Now approaching the Tropic of Capricorn, where the temperatures remain at 36°C. Those who know me well enough will realise that I don’t cope well with the heat, which is one reason why I’ve had my longer road trips during the winter season. Now at the small outback QLD town of Boulia to have a shower in a normal bathroom and a “gourmet” beef burger with chips before heading out to the remote desert tracks again.

Day 7: Update for yesterday – Odometer 16647km. So if I don’t either fall or get bogged, then it must have been planned that I get a flat front tyre on the most remote “highway” ever, by the powers that be! Highway strictly by name only, the Plenty Highway is an interstate route that is made up of massive corrugations and potholes covered with inches-deep bulldust. Pretty much as bad as it gets for one road.

Day 8: Live update – Odometer 17200km. I made it “home”! It’s taken me countless falls, a flat tyre and even a flat battery from this morning, but I’ve made it back on asphalt! I will never take a tarred road for granted ever again!

Day 9: Update for today – Odometer 17798km. Second time visiting Uluru-Kata Tjuta National Park, first being on the Ducati 1199 back in mid-2015. Great to be back in the centre of Australia. Both rock formations of Uluru and Kata Tjuta are absolutely amazing to see in person.

Day 10: Live update – Odometer 18251km. Now on my home run back to Sydney. Rather disappointed that I couldn’t allocate the time for a visit to Kings Canyon, but I’ve visited the Northern Territory three times in the past 2 years all on motorcycles, so I’m pretty sure that I can squeeze in an opportunity to go and see it in the near future. Goodbye for now, NT!

Day 11: Live update – Odometer 18751km. You know that you’re in the Coober Pedy opal mining region of the Stuart Highway when the flat plains transform into a landscape of dirt dumps scattered everywhere. I’d have to do a proper tour of this area in the future to check out the opal mining operations and the underground structures in town; an interesting part of the country.

Day 12: Live update – Odometer 19125km. Salt lakes are a common feature within the vastly arid interior of South Australia. Half regretting the decision not to take the Oodnadatta Track back towards NSW (which meant unsealed trails, something that I am not that keen on doing for the rest of this trip as my body is massively fatigued), where I could have visited Lake Eyre, but this will do for now.

Day 13: Live update – Odometer 19729km. Finally back on NSW soil. I don’t know why I’m raising my hand for… I still have a long way to go until I get back home!

😂 … Must make it back to Sydney by tomorrow.

Day 14: Live update – Odometer 20915km. Bruised but renewed. Tired but content. Enlightened but still learning. Discovered but not yet totally explored. Most crucially, I am humbled but grateful. That felt like much more than just a 14-day period out of Sydney. Great to be back home!