Africa Twin Across The Outback 2017: Day 2 – Cobar to Tibooburra

Day 2: Live update – Odometer 14875km. White Cliffs, an opal mining town that I had visited 2 years ago on the 1199. Progress has been a little slower than I have anticipated. I thought that by getting a proper touring bike that I’d eat up more kays than the other less suitable bikes I’ve toured on, but I was wrong 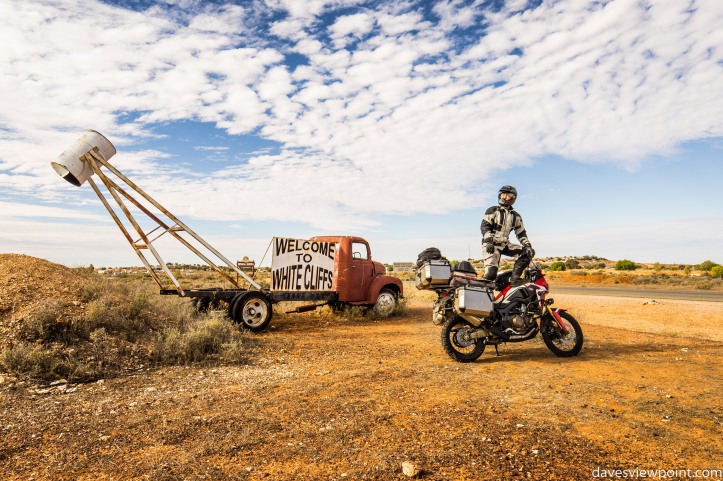 Rookie mistake #2: When I fully knew that there will be hundreds of kilometres of gravel and dirt up on the route ahead, but didn’t bother to drop those tyre pressures until the journey went off its rails.

The road from Sydney to Cobar had mainly consisted of flat, paved highway straights. Apart from having to handle the porky weight of the bike around town, it had overall been a very easy cruise. The road is of the same grade all the way up to White Cliffs via Wilcannia. It’s all smooth sailing until you get to the edge of town at White Cliffs, where the real adventure begins. All routes branching out of town leads you on to high-speed gravel roads of up to 100km/h signposted speed limits.

I already did anticipate that, from the point of White Cliffs onwards, it was going to be a totally different world from what I had seen the previous day. However, despite this, I did not make any required amendments to anything on the bike. Venturing now on to rugged trails of loose stones and mildly hilly, wide curves, I left my tyre pressure untouched at 32psi for the front, and 36psi for the rear, pressures that I mainly use around the city streets for the Heidenau K60 that I have fitted on the bike. 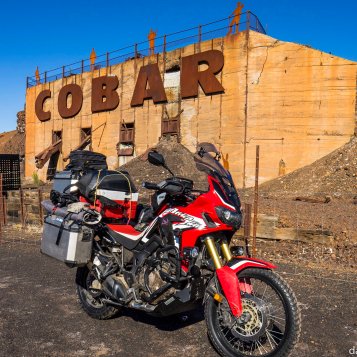 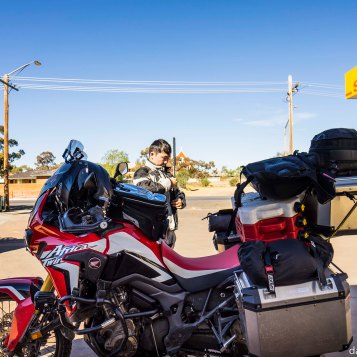 Travelling at a comfortably brisk 90km/h, which is still less than the outright legal limit out here, standing securely on the footpegs, I felt adequately confident that I wasn’t doing too bad, considering that I had not made any changes to the stock suspension apart from applying extra preload on the rear to make up for the weight of the luggage. However, being inexperienced in long-distance unsealed riding, I wasn’t totally sure within me whether perception and reality were aligned, or if they were actually worlds apart.

The bike was immensely top-heavy, due to the pillion rack mounted Rotopax canisters, and the additional heft of the contents in the top box, which meant that a lot of the weight on the bike was biased towards the rear. This has a detrimental effect on the balance of the bike. Once the rear lets go of grip, it becomes a mammoth task to try and regain composure, as the rear will react heavily against any countersteering measures that the rider would initiate on the road. 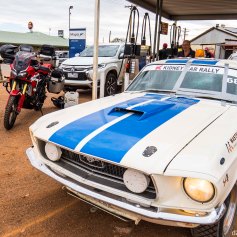 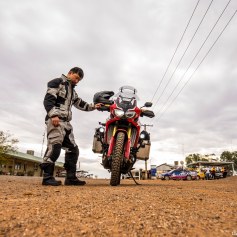 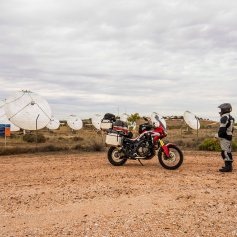 Nevertheless, 25km into the unsealed section, things certainly turned pear-shaped as a result of the mentioned aspects of the bike. As I was negotiating a slight right hand turn on top of a crest, the rear began to fishtail, progressively intensifying within the five seconds that it occurred. Eerily, thinking about it in hindsight, it felt like the longest life-endangering five seconds from where I’ve ever managed to break away. I could even analyse each and every second of it. In fact, I may as well! 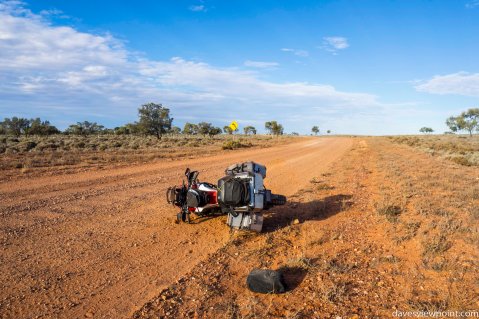 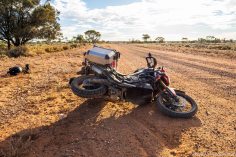 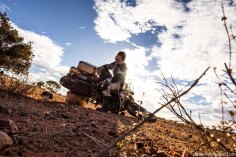 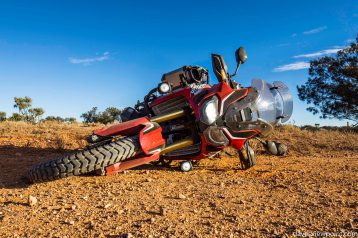 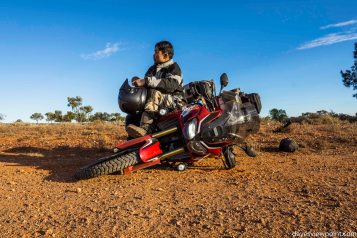 Dropping the bike on its left side whilst travelling at around 70km/h, the fun and freedom of the road turned into one of chaos and uncertainty. As the bike eventually slowed to a halt, front facing the direction that I came from, a stark sense of reality tore through me. Still on the ground, with my leg stuck underneath, I slowly self-examined my body and limbs. First and foremost, despite what today’s riding culture may suggest (i.e. the tendency to wonder what’s happened to your bike first, rather than yourself), your body is so much more important than any bike that money can buy. Ultimately, if you’re not able to move yourself out of a situation where nobody is around to help, then you can possibly die. It’s as simple as that.

Moving each part one by one cautiously but optimistically, the arms, hands, legs, feet, neck, hip, I waited for any pain receptor to send out some loud alarm signals through the nerves. I wanted to know that I was going to be okay, but I also needed to be realistic in the sense that I should rightfully end the road trip if my health condition was compromised in any way. I wasn’t going to ride with a broken bone, no matter how foolishly I might try to act tough and invincible against all odds. Nobody is going to care or going to look up to you with starstruck eyes as a result of your endeavours, if there’s a safer, better and logical option to take. 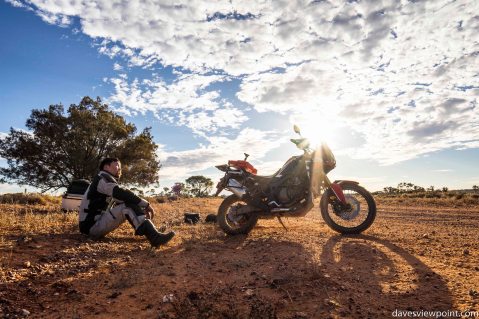 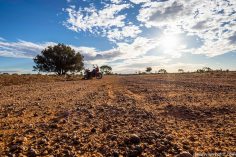 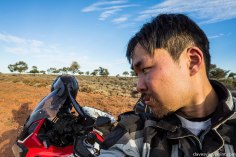 Amazingly, I emerged out of the incident with only a bruise on the inner side of my left calf, which occurred as a result of my leg being stuck between the bike and the ground. It could have ended up much worse. The possibilities are endless. A broken foot, dislocated shoulder, head trauma, head on crash against a tree, animal or another vehicle; it can go on. Counting my lucky stars…

And then there’s the bike. Although I knew that the Africa Twin was designed specifically to be an adventure tourer, I wasn’t absolutely sure about whether it would be able to withstand the potentially destructive events of an accident. Incredibly, nothing that related to the mechanicals of the bike were affected at all.

The Hepco & Becker handguard bars, Outback Motortek engine cage bars and the left side Givi Outback Trek pannier were all scuffed up. They handled the impact so well that, if I were to remove all the aftermarket bits, the bike will still look immaculate. You would have not been able to tell if it was even dropped at all, let alone be involved in a 70km/h slide over a rugged, rocky trail in the Australian outback! 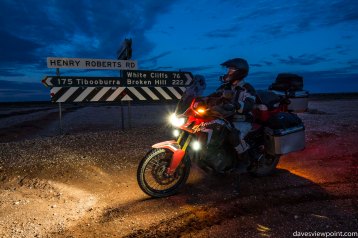 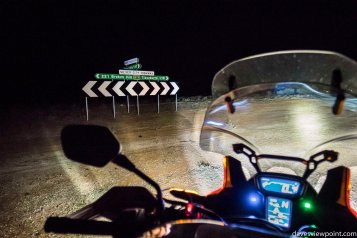 Now that I had an actual crash experience on the Africa Twin, I no longer just know that the bike is tough as hell. Not only do I know, I also believe it with all my heart! So much so, that I would not mind if the bike were to drop down on the ground again! Want to have a red-hot go at it? Be my guest, I’d say!

I knew that my tyre pressures were a significant contributing factor to my crash. Consequently, I dropped the tyre pressure to 20psi on the front, and 22psi on the rear so that I can lessen the likelihood of the repeat of a similar incident. 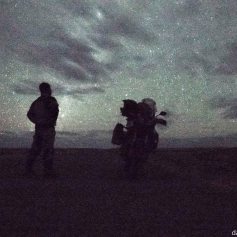 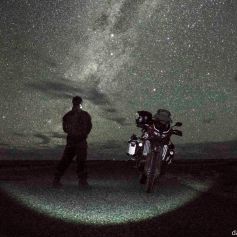 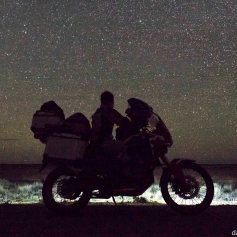 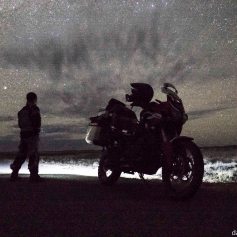 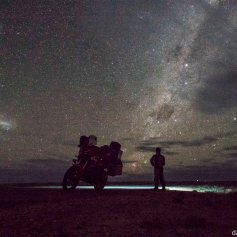 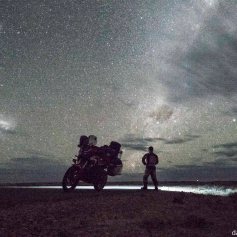 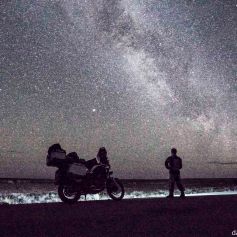 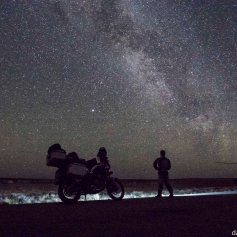 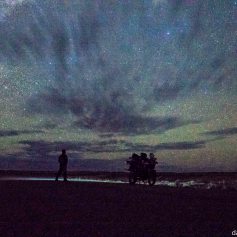 I’ve always made it a thing to take some photos of a starry night sky for every road trip ever since I started camping with the Ducati 1199 Panigale that I had owned before purchasing the Honda Africa Twin. One of my personal favourites can be seen in this blog post, where I went on a short overnight camp trip with mates to the Central West region of NSW. The majority of my photos have been taken with my Sony a7R mirrorless camera, which I love using as it features a full-frame sensor yet retains dimensions that are more akin to that of a compact point and shoot camera; an excellent choice for motorcycle travellers whose space is at a premium.

I tend to be pretty lax when it comes to keeping my camera lens clean. For this road trip, it was also exacerbated by the constant exposure to dust and sand that the camera was exposed to in the outback. Basically, I would have needed to clean it every time I used it because of all the wind that was blowing throughout the trip. Although it’s best to keep the lens area immaculate at all times for the best results, it takes time and effort, both of which I preferred to have used on my travel progress. Regardless, I tried my best to capture the vibe at the time, more than the place itself, so I didn’t necessarily need to have a perfectly crisp shot to keep me satisfied!

The tiny town of Tibooburra was glowing underneath the midnight moonlight. As this trip was totally unplanned, my rest stops were undetermined, my routes unknown and, essentially, not even my camp sites were planned in advance. I had no idea of where I had to stay for the night. As it was midnight, there was not a living thing in sight on the streets, the only thing active being a power substation buzzing in the silence of the dead of night.

I decided that I should get a move on, and leave the town. I had enough fuel with me to last another 250km. Everything under the sun was a possibility, as long as I retained the drive within me to continue. However, I did really need some sleep, as it had been a massive day of over 700km with a mixture of tar and dirt, with a crash in between it all.

I eventually found an isolated plain where I was sure that I wouldn’t disturb anybody; indeed I was probably the only human within a 50km radius. I am alone, and will be alone for the vast majority of this journey, but loneliness is a word that does not belong in the vocabulary of a motorcyclist on the long road. With desolation comes desperation, as I pitch a tent to form my own enclave and declare my borders. I survey my discovery, reminiscent of an astronaut on the moon, adapting to the inevitable seclusion of a foreign setting less travelled. 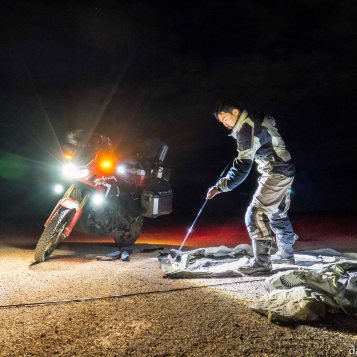 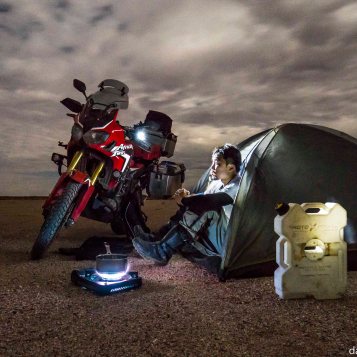 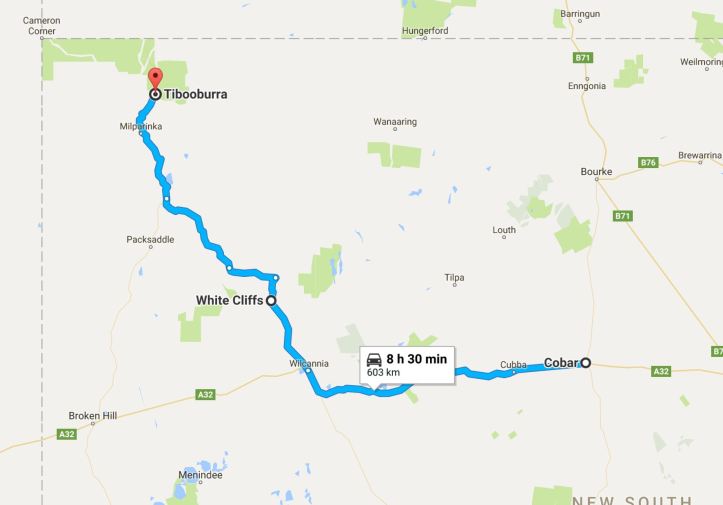