Africa Twin Across The Outback 2017: Day 3 – Tibooburra to Innamincka

Day 3: Update from approx 5pm – Odometer 15521km. Finally made it to the tiny town of Innamincka, in outback South Australia, via the very sandy Old Strzelecki Track in the dark. Most difficult day that I’ve experienced ever as a motorcyclist. I’ve asked for an adventure, but I got thrown more than I was prepared to do. I’ve now dropped the Africa Twin three times so far out here. Glad to have made it here in this little town…

By failing to prepare, you are preparing to fail. Apparently. For the best of intentions, we anticipate and desire only successes, and that is all well and good. At the same time, life is full of both successes and failures, despite all the preparation that one may wager with their precious time and diligent efforts. There are so many variables out there to try and topple you from your composure and lose track of your focus.

Preparation does not negate the possibility of failure. What, also, can a person be prepared for in a world of uncertainty. One may prepare towards failure with the intent of open-mindedness towards an unknown outcome. Some may totally fail to prepare, yet may not be inundated by failure; in some cases, unwarranted success, an anomalous reality for the extremely fortunate. The standard of failure and success in certain instances can also be subjective, based on the perceptions of the individual. Preparation and failure aren’t necessarily mutually exclusive.

The extent of preparation, in my case, was limited down to simply to those in relation to gear and supplies. I made sure that every single thing that I had packed for the trip had a worthy cause, and that they were an absolute necessity, no matter what. Whether it be the tyre repair kit and various tools, or the hand sanitiser and wet wipes (because I can’t stand having scungy hands!), each item had to have an integral purpose that will enable me to cross the finish line as a solo rider without assistance from anyone.

I don’t expect to get stranded when I go riding, but it’s important to prepare for the unexpected, especially when it comes to food. Wherever I travelled, I did plan specifically to be able to survive for at least three days, so I stocked up on food and water supplies accordingly throughout this trip. Although it seemed like outright overkill to be carrying so much food, as detailed in the recount for Day 1, I figured that eating sand and insects would be a little less appetising than the numerous tin cans of tuna, packets of instant noodles, muesli bars and almond milk for every meal of the day.

All my gear and supplies were used together as a synergy of a pure outdoor experience. My items held simple purposes, but they combined to create a continuous flow of processes that alilowed me to focus on the main activities.

Here is a short concise list of the main individual items that lists their function:

Those mentioned items all help as part of the travelling progress, so that I can focus on these activities: 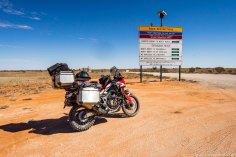 Despite all that preparation for gear, I completely omitted the most important aspect of any road trip. For such a substantial journey, it may surprise some people that I had not planned the route for the entire road trip at all. None. Nada. Zilch. Okay, maybe just the road out of my home suburb in Sydney, but that was it, really. I had a slightly difficult time just trying to get out of Greater Sydney, as I turned circles for a little less than an hour in some random Western Sydney suburb, while I searched for a shortcut without the help of a GPS, which turned out to be the worst idea as some roads in Sydney tend to lead you onto roads of a completely different direction. All I had in mind was that I had to make it to Alice Springs, and that I simply had to take the shortest route possible, but I had no prior clue as to how to do it. 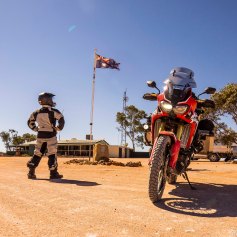 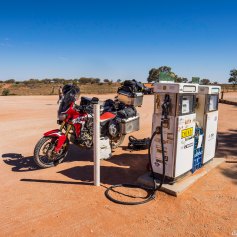 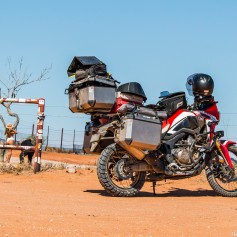 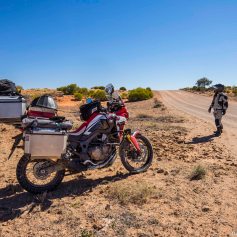 Considering that my routes were all improvised on the spot, this road trip should have been a disaster from the get-go. Akin to a battalion that is loaded with weapons in anticipation for war, but with an indecisive lieutenant who has no idea of how to implement a strategy, I was a geared-up adventure rider without a clear knowledge of what was ahead and how to negotiate the challenges associated with the local conditions.

The only insight I had that was of any possible use were the dirt tracks behind me, where tyre prints mark the dusty surface that was once uncharted territory for my Africa Twin. My on-road potential and capabilities will only be as good as the section of journey already completed, and this was reflected by how I approached the various terrain that I had to travel across. 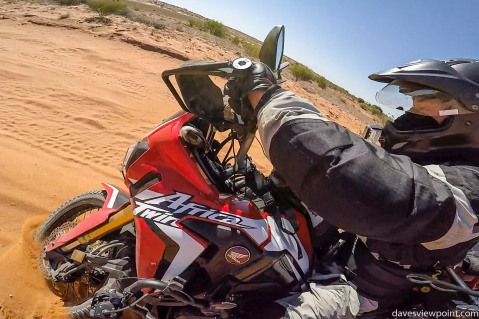 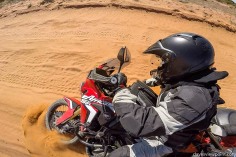 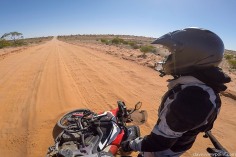 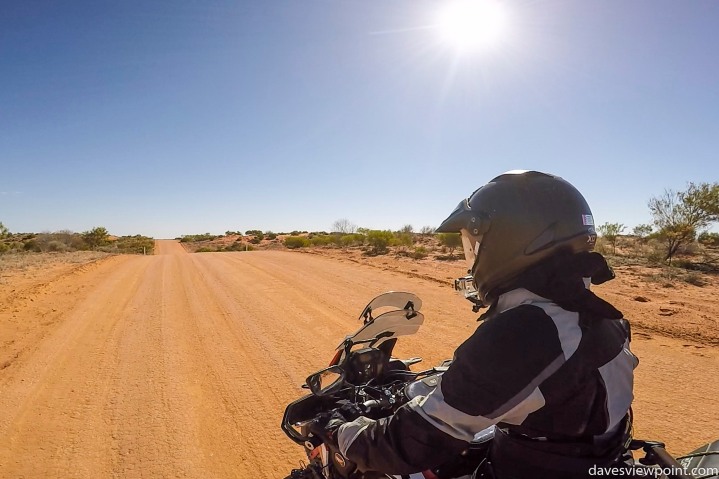 Taking into account that I had no idea where I was headed, it was very much not at all surprising that falls and drops were to be a common theme throughout my journey. This time, as seen in the above photos, on a soft stretch of deep bulldust. This was the first time to have experienced surfaces of this type with the amount of luggage that I had on the bike. Before I knew it, I was slowing down against the resistance of particles that felt like gritty loose sand to the touch. What I didn’t expect, though, was that the surface of the track would continue on, and progressively worsen as I enter the grounds of the Innamincka Regional Reserve, an oasis surrounded by harsh, arid lands of Outback gloom.

Picking up the bike off the deep patch of bulldust was the biggest challenge to date for this trip. The loose surface meant that I wasn’t able to get a proper footing whilst lifting the bike. Direct exposure under the harsh rays of the midday sunshine compounded the agonising situation. My journey had also been a relentless pursuit towards maximum daily mileage, so the effects of both physical and mental fatigue were in effect. All these factors in unison meant any unanticipated change in conditions would spawn a hugely negative impact on my performance behind the bars.

Ruined, and absolutely exhausted, I was only a few gasps to unconsciousness as I struggled to stand the bike up. As my head seemingly spun a million rpm, dizziness and confusion hit me like a snare hooked up to an amplifier. The effort required to get the bike back up in the heat was so monumental, that I needed to take an hour break underneath the closest shade that I could find. Starkly, there was no other choice for me; I could not continue on with the journey in the physical state that I was in. 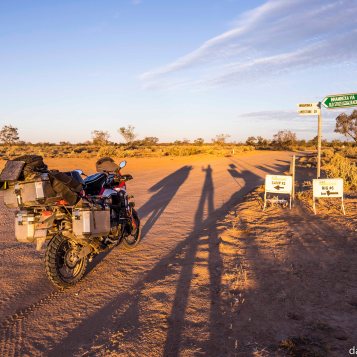 No matter what happened, though, I was absolutely adamant about making it to the town of Innamincka. I wasn’t going to let myself down by turning back to Cameron Corner and giving up, even if the risk up ahead was potentially massive in the face of perilous uncertainty. Muscles aching enormously, as I force myself to stand on the pegs with weakened, tired legs, I wasn’t going to yield to defeat. Fighting until my last breath, resisting the demons of the merciless arid environment, this journey was a matter of life and death, and I was going to grasp it by its throat, declaring that the day is mine to own.

The sunset was a good sign that I was going to survive. Direct heat is one thing that I cannot bare against, which is why I prefer doing my road trips during the cooler seasons. As the afternoon brought in a pleasantly cool change, the clouds turn into a soothing pink. No matter how bad a day gets, there is always room for positivity within the heart. The simplest of signs can uplift a lonely spirit; the old can be renewed, and the lost can be found again. Just like a starfish that can grow back its limbs, so too can our strength be rejuvenated and regain motivation to continue on the path to success.

“For there is hope for a tree, if it be cut down, that it will sprout again, and that its shoots will not cease. Though its root grow old in the earth, and its stump die in the soil, yet at the scent of water it will bud and put out branches like a young plant.” – Excerpt from a sacred scripture.

In the end, despite another fall on the bike in the dark, I made it to Innamincka at 8:30pm, Australian Central Daylight Time (ACDT), in the dark. The staff at the local roadhouse were about to close shop for the night, so unfortunately there wasn’t anything available that was cook to order. However, they were kind enough to hand me over some cold sandwich and chicken leftovers. I still had to pay for the damn stodge, but I was damn desperate. Literally anything passably edible was okay.

The fact that I made it to Innamincka was a great achievement from my personal view at the time. To think that I had made it to this point without any injuries and any other major issues was quite perplexing, especially because of the fact that there was absolutely no planning done for routes and directions. Looking back now, the food that was served by the roadhouse was terrible, but the sensation of achievement overrode any scepticism and criticism. The flavours of the open road saturated my taste buds as I took every bite out of the food. You get this grateful feeling in your heart that, every day on the road, that is this life lived to the fullest. It sounds shallow, to think that riding a motorcycle into such isolated places mean anything but. Yet, such endeavours make me feel so alive and happy. And isn’t that what life is all about? 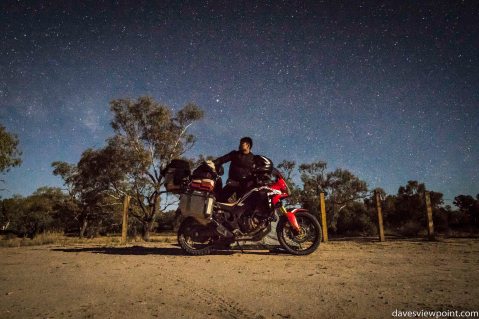 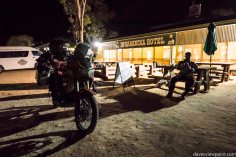 Note: Map below only shown as general guide for locations of localities. Route taken from Cameron Corner to Innamincka unknown, as I don’t really know where I was going.. 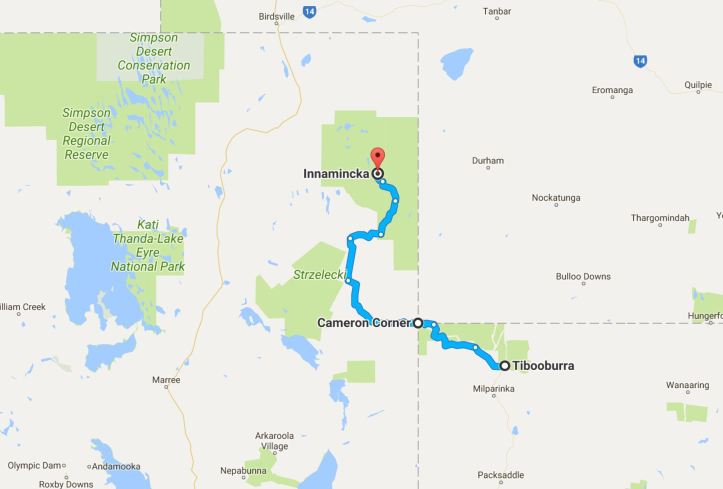