3rd of June, 2018. The grand trip across Europe on the Deutsche Maschine finally commences!

Finally all loaded up and genuinely ready to hit the long road! My original plan with Konrad was to explore the Alps region together, but the weather forecast was looking treacherous. As my mate’s old Monster 900 is prone to spark plug issues in wet weather conditions that cause its twin engine to run on one cylinder, we had to reroute our destinations to the dry and sunny parts of Europe.

With all this in mind, we pointed our wheels and bars towards the east. Konrad still had heavy uni commitments to consider, so our time together on the road was to be shorter than we would have desired. Nevertheless, we hoped to make the most of our brief road trip together before I took on my own way towards Greece.

The Autobahn makes for incredibly swift and easy work for cross-country touring across all the German states, referred to as Bundesland in the German language. Contrary to the popular belief of widespread unrestricted speed zones, speed limits are enforced in many sections of the German network of highway, commonly set at 130km/h which is the norm across many of the other countries in Europe. However, where there are open speed zones, you can safely let loose on that throttle to your liking.

Surprisingly and equally as pleasing is the total lack of highway patrol presence. Driving attitudes seem to be a whole level above those of the Aussies, so there is a societal expectation to be independently responsible on the road, instead of having the government to police every aspect of road behaviours. The best thing about this: slower drivers know at the very least to always stick to the slow lane! Worst thing? Well, it wasn’t hard to stay close to the 200km/h mark at times. When on the Autobahn, think of that speedometer of yours as as gauge for the wear rate of your soon-to-be squared-down tyres. If I had ridden the bike in the same manner in Australia, I would have lost my licence… long ago!

In typical Dave fashion, we didn’t plan our end destination for the day, so we continued on the autobahn until late at night when we found a secluded area behind the bushes off the highway. Now that we had reached the region of former East Germany, Konrad and I both can say that we are a long way from home. Leipzig tonight, Dresden by morning! 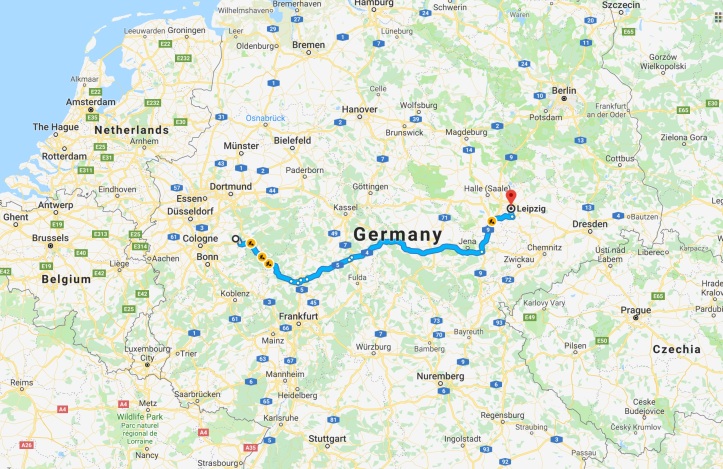