Squids: They’re everywhere in Brisbane! I must have chosen the wrong day to visit. In fact, these squids were out in hordes all along the coast, from Brisbane to Byron Bay. I felt obliged to follow this culture for a moment… so for a day, just one day, I decided to give in to this inclination.

Okay, so for the uninitiated, “What is a squid?”, you may ask. Isn’t that just a type of a popular seafood that can be barbequed, boiled, broiled, baked, sautéed, pan fried, deep fried or stir fried? There’s that, but in social media, at least within the motorcycling community, there is another meaning to it, and there may be slight variances in a definitive, complete description of one.

‘Squid‘ can be said to be a contraction of ‘Squirrelly Kid’. One can earn this particular title by displaying a riding style where the racing lines more resemble a squirrel’s erratic and sudden movements than a steady and progressive motion of an experienced rider. Demonstrating such actions on a motorcycle, particularly on public roads, can only be described as a dangerous manoeuvre.

Due to the risky behaviour of a typical ‘squid’, the term can also be extended to the dress code of a certain breed of motorcyclists who are looked down on with disdain by ‘ATGATT’ advocates. ATGATT is an acronym for ‘All The Gear, All The Time’ and is widely taught to new riders by motorcycle instructors. A person without suitable gear can be considered a squid.

ATGATT is the basis for one of the elements of utmost defensive riding habits, particularly for public roads where it is so easy and tempting to do without certain gear because “It won’t happen to me”. As well as being alert on the road, and getting skilled up to know your and your bike’s capabilities, being geared up with suitable protective gear will ensure that injuries are avoided if possible or, at least, reduced.

The extent of protective gear used to pass the ATGATT definition can also vary among people. A helmet is a given, as it is a legal requirement to wear one in Australia. The typical squid can be seen on the road with normal everyday clothes and shoes, with the helmet being the only protective gear. A rider, according to some, can also be considered a squid if even only a pair of gloves and boots are worn. One consensus can be made as final, however, in the minimum of an ATGATT pass: helmet, full suitable leathers including jacket and pants, gloves and boots. Kidney guards and back protectors can also be used in conjunction, but not in absence, of the rest of the mentioned ATGATT gear.

So, anyway, how did my first-ever full day as a squid go for me? See down below!

Brisbane is one hot place! Coming out from the air-conditioned room to the rooftop area of the hostel, first thing I noticed was the heat of a morning that I associate with a very hot day to come. However, what really got me out of my usual comfort levels was the very noticeable humidity. Apparently, that is typical of a Summer day in coastal Queensland. 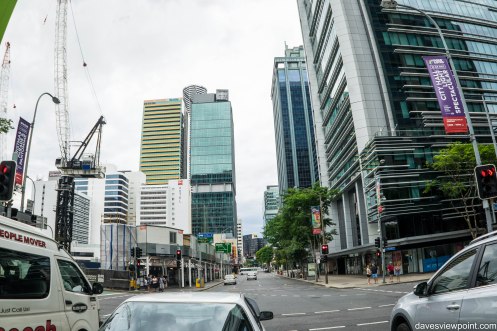 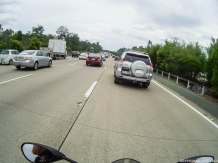 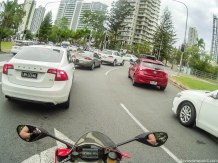 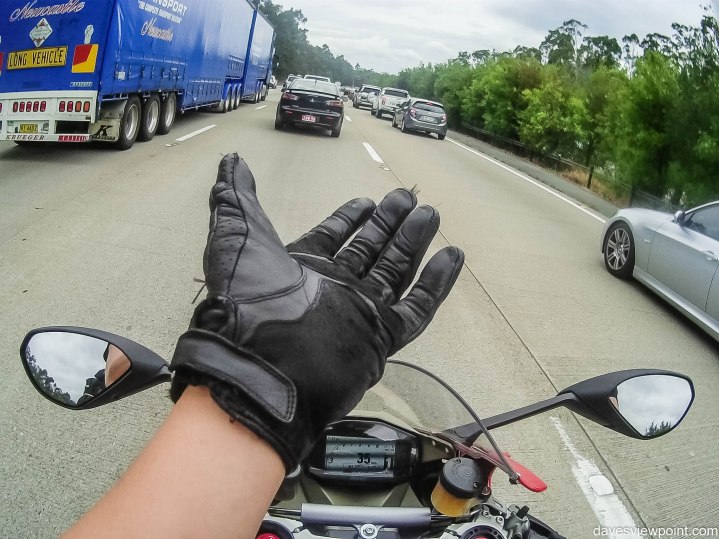 On my way out of Brisbane, I found that Sydney is not alone in being a motorway traffic nightmare during the holiday season. The traffic flow of the Pacific Motorway was crawling at a snail’s pace for the majority of the ride between Brisbane and the Gold Coast.

When I eventually arrived on the Gold Coast, I spent probably an hour at most, sightseeing and taking just a few photos in Surfers Paradise (slideshow above). As mentioned in one of my past blog post, I’m a happier man when I’m spending time by the banks of a river in the middle of a forest than on an urban beach.

So, instead of dipping my feet in the crowded waters of the coast, I happily killed off some time, briefly shooting the riding scene in the area, as you can see by the slideshow images above. Leathers must be uncool out here but I enjoyed the variety of vehicles that were on show, particularly the abundance of mopeds that you can rent. 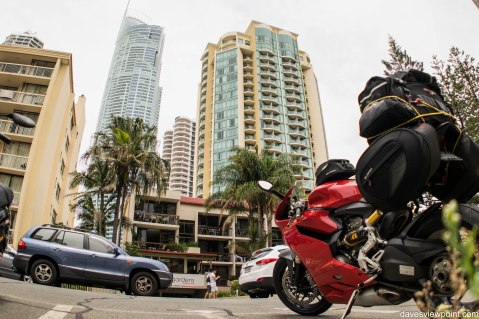 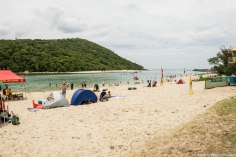 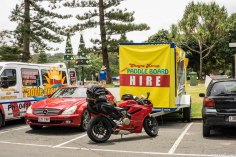 I resumed my way further down south, past Burleigh, to reach the southernmost coastal Queensland suburb of Coolangatta, where I decided to pay my former head chef, from years back, a surprise visit to his newly-opened grill restaurant called Bondi Grill’e. 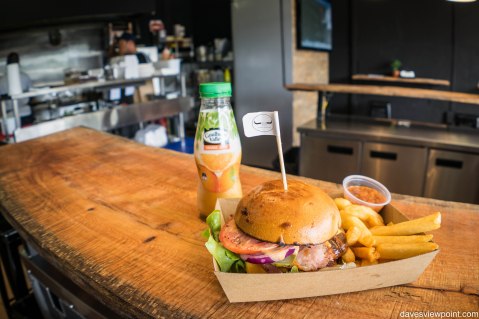 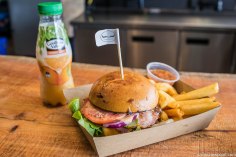 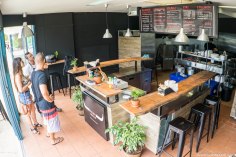 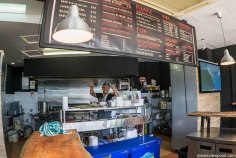 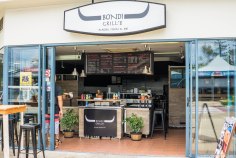 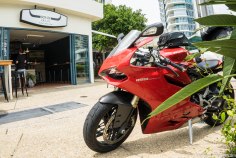 After a good catch up session, I tried one of his burgers, which he grilled up to perfection. Cheese & Bacon burger, between toasted but fluffy-soft Brioche buns, wholesome melted cheddar cheese, transcendentally juicy bacon strips, refreshing contrast of tomato, red onion, lettuce and gherkin slices, made complete with the signature basted patty of top quality, local beef mince, all sided by the crisp of a handful of potato chips, intensified by the undeniably-Portuguese zing of Peri Peri sauce. Perfection!

En route to Byron Bay via the hot and humid Pacific Highway, when torrential rain decided to make its presence felt. I took a pit stop at the nearest roadside service centre, where I saw a group of riders on some hip-looking cafe racers with luggage tied down on every bike. I almost felt obliged to follow them but, by the time I was done putting on my wet weather gear, they were gone. The journey continues…

My first ever visit to Byron Bay was marred by the constant light rain, so the rest of the evening was spent indoors, cleaning up my gear and admiring (read: stare with regret) my squid burns on my arms. The various clubs in the area were open but there are several issues with that I have: I am far from being a ‘clubbing’ type, my wardrobe consisted only of bike gear and, after a good day out on the plank of wood of a Panigale seat, social time would be the last thing in my mind. More sleep time for the win. Am I sounding anti-social enough?

My dorm buddies during my stay in Byron Bay were the travel bug-bitten Spanish girls of Aves de Paso, who were two-thirds through with their 15-week travels across South-East Asia, Australia and New Zealand. They’ve been taking some cool happy-snaps of various landscapes that fill me with awe and envy. Definitely a trip that I would also love to do, and certainly one that they will remember for the rest of their lives. One day…

So how did my first ever day as a squid go? Well, it wasn’t as enjoyable as people like to make it out to be. Squids usually do their thing when it’s as hot as it was in Brisbane and the Gold Coast. However, I found that the lack of gear covering my skin actually made my journey feel hotter as I was fully exposed to the sun.

As would the typically unprepared squid be, I also went without any sunscreen. This meant that my arms were all burned under the severe rays of a Queensland Summer. As seen in one of the photos above, my arms were not spared the wrath of my stupidity, and the following weeks saw me picking off layers of dead skin from my arms.

Finally, it just didn’t feel right without gear on to cover my body. I felt like a turtle without it’s shell, or a crab without it’s hard exoskeleton. The experience was akin to a cat being let out in the middle of a busy highway, waiting to die. Would I ever spend time as a squid ever again? No, at least when I’m riding out in traffic. I will keep the squidding for my post-bike wash sessions up my street.. but that’s just opening up another can of worms, isn’t it.. 🙂

Basic stats for the day: 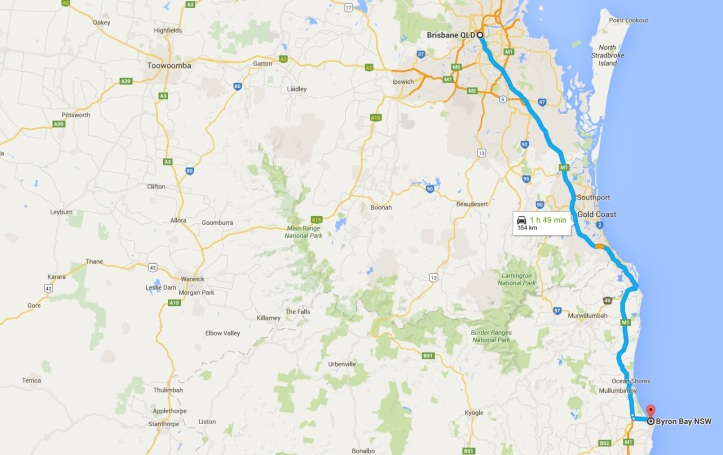