Day 5: Earlier in the day at Coffs Harbour, a beautiful place. Currently munching on some carbs at Taree service centre, and just trying my best to survive and return to Sydney tonight. The run back down on the Pacific Highway is always a dreadful one. Chain is dangling and dancing around like the Bee Gees, and rear tyre is undergoing some intense pressure from all those near-highway speeds and excessive luggage loads. If I make it home like this, I will sleep with a grateful heart tonight.

Sleeping overnight on the park bench sounds like an uncomfortable ordeal but, as one who voluntarily and occasionally sleeps on the floor at home, it wasn’t too much out of the ordinary for me. But seriously, I could sleep anywhere if circumstances dictated it. Give me a cold, hard area of concrete and I’ll still somehow make a night’s worth of rest on it!

Due to work commitments, I had to make the 800km trip down back to Sydney by midnight. After two long days at work, I would be free to continue on with my journey down to Melbourne. Aiming, at the latest, a 8am departure from the Gold Coast, I spent the bulk of the early morning to take some photos that I couldn’t manage to do the night before. 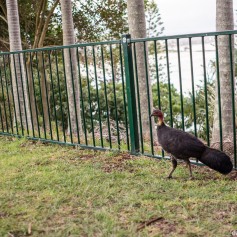 Coolangatta is the southernmost part of the Gold Coast region. The concavity of the coastline allows for an unobstructed view towards the towering skyline of Surfers Paradise. An outdoor lifestyle is clearly the most important aspect of this region, and is the prime force behind its tourism industry.

Endless beaches, extensive waterways, meandering jogging paths and the forest hinterland in its backyard, the highly urbanised and modern Gold Coast is one of the fastest growing metropolitan areas in the nation, an indication that it’s become a very attractive place to call home for increasing numbers of residents.

If you’re looking to get on to two wheels, but don’t have a legitimate motorcycle licence, I highly recommend that you look into hiring a moped, something like the 50cc bike that’s pictured above with the happy couple. These things are everywhere on the coast for good reason; all you need is a car licence and you can effortlessly explore the town, whilst convincing yourself that squidding ain’t that bad after all. Well, at least in the squid capital that is the Gold Coast. You’d be hard pressed to witness any motorcyclist out here with more than a helmet and pair of gloves. You can thank the beach culture that is ingrained in this community, in which a shirt might even be considered as being overdressed.

Coolangatta and Tweed Heads are located in QLD and NSW respectively, but due to their proximity they can be considered as part of one larger economy. Rows of high-rise buildings line the streets that connect the towns. A monument stands in between the twin towns adjacent to the the Wharf-Griffith Street roundabout intersection, which clearly marks the state borders of Queensland and New South Wales.

The most interesting part about the border is that you can step into a different time zone, and celebrate the New Year twice! On a more practical basis, the time zone differences between the two towns mean that you can still head up to a supermarket on the QLD if you find that the one in NSW had already closed for the evening. This difference might also legitimately pass as the odd excuse for why you were late for your date. Don’t count on me that this would work, though.

Leaving the Gold Coast, I head down south to make my way back to Sydney. The driving conditions on the Pacific Highway between Ballina and Port Macquarie are simply horrendous. You’d best be taking an inland route to Sydney if the coast is not an essential part of your journey, especially with the still-ongoing road constructions. Dramatic changes in speed limits from 100km/h to 50km/h are a common trend on this route and, to make matters worse, many of these changes are accompanied by money-making fixed speed cameras. If you’re travelling during the holiday season, yes, you bet that highway patrol officers will be keeping a sharp eye on your road behaviour.

Ideally, I would have taken the inland road that leads to Glen Innes, then head south to Walcha where I could take the route back on the coastal Pacific Highway via the best motorcycling road in NSW, that is the Oxley Highway. Regrettably, the Grom doesn’t have enough power for me to even reach the speed limit of those roads for most of the time, and it’s already a significant detour to make in terms of raw distance. I would have needed another whole day to cover those roads on this little 125cc bike. 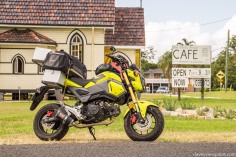 Broadwater, on the Pacific Highway, has always been a memorable town for me, but not one that I had actually ever stopped at until now. An old church turned cafe restaurant is a distinctive landmark of the town, a historical building that is heritage-listed. With its clean exterior and renewed interior, the venue has been kept true to its original by the owners who have given it a full restoration in 2012 after many years of it being left closed off and unused. A pleasant place for the traveller to take a break in between destinations. 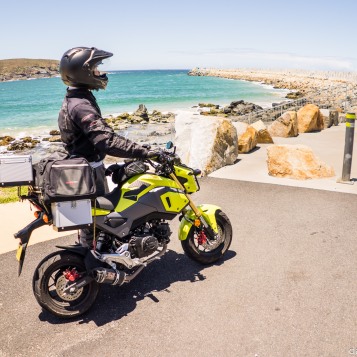 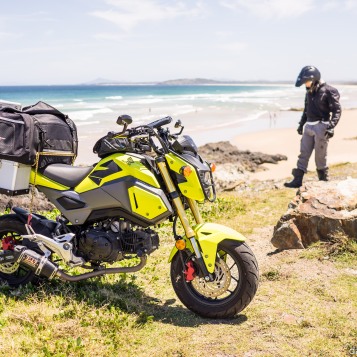 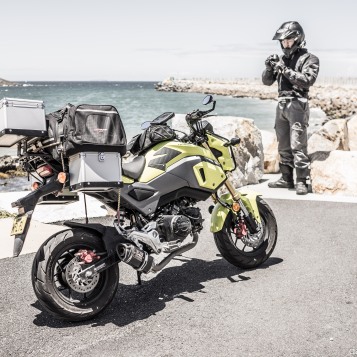 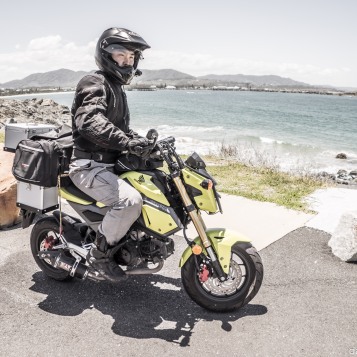 Coffs Harbour is another town in which I haven’t really given much of my time in the past. Apart from the compulsory Big Banana stopover, this town was just another one on the Pacific Highway. Although my intention of the day was to stay only on the Pacific Highway, due to the low average speed of the Grom and the substantial distance to be covered for the day, I felt that I had to at least check out the coastline in this part of NSW. I went to go and see; it didn’t disappoint me. 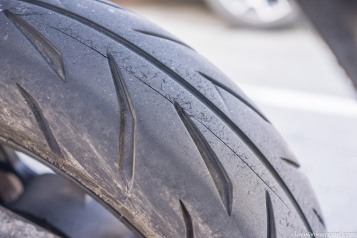 Macksville is, by far, the worst on the Pacific Highway route in terms of traffic flow. During holiday periods, the traffic jam usually extends up to around 10kms as highway traffic approaches the local single-lane roads in Macksville; a blatant textbook example of a bottleneck.

The traffic jam was a chance for me to pull up at the servo to take a break and do the routine bike check. As seen above, the rear tyre was getting seriously hammered by the constant highway runs. More crucial than this was the condition of the chain. I already new that the chain was loosening throughout my journey (and, mind you, for this trip I was running the stock chain, which is notorious for being of poor quality), but have now discovered that the chain had become a dangerous hazard. I didn’t have any suitable tools to adjust my chain, so I took the risk of continuing my way home.

Making it home in one piece, I arrive at 12:17am, having done 2587km within the span of 5 days. The bike itself ran without missing a beat and, although the shoddy stock chain was detrimental to the wear and tear of the sprockets, it could stay until after I complete my trip down to Victoria. For such a small bike to have averaged 500km a day, despite struggling to reach 100km/h with its luggage and boxes, I’d say that, for now, the Grom has been a successful long-distance tourer. Outback NSW and Brisbane completed. Next stop on the horizon, Melbourne! 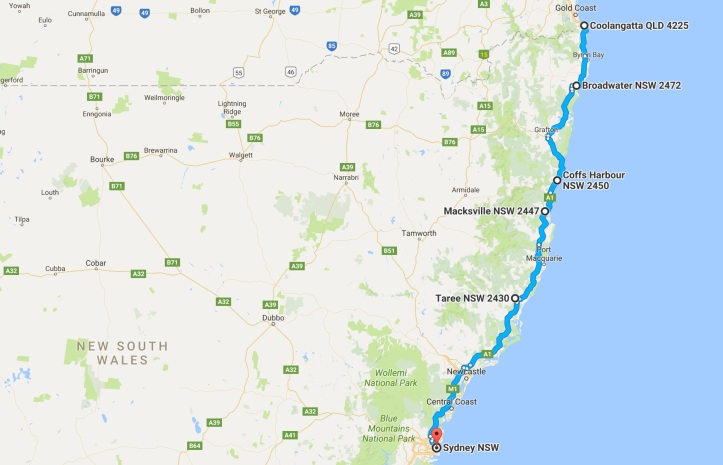